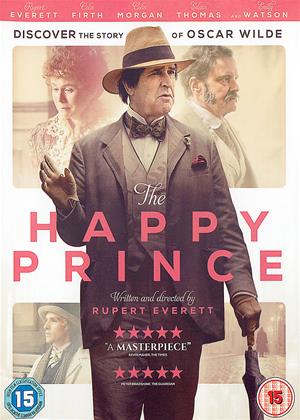 Synopsis:
In a cheap Parisian hotel room Oscar Wilde lies on his death bed and the past floods back. Under the microscope of demise he reviews the flailed attempt to reconcile with his wife Constance, the ensuing reprisal of his fatal love affair with Lord Alfred Douglas and the warmth and devotion of Robbie Ross who tried and foiled to save him from himself. From Dieppe to Naples to Paris, freedom is elusive and Oscar is a penniless vagabond, always moving on, shunned by his old acquaintances, but revered by a strange group of outlaws and urchins to whom he tells the old stories - his incomparable wit still sharp.
Actors:
Rupert Everett, Colin Firth, Emily Watson, Colin Morgan, Edwin Thomas, Tom Wilkinson, Anna Chancellor, Julian Wadham, Béatrice Dalle, Antonio Spagnuolo, André Penvern, Franca Abategiovanni, Thierry de Coster, Joshua McGuire, Kit Lloyd, Jacky Druaux, Sam Perry, Sam Barrett, Aymeric Bolé, Christian Bronchart
Directors:
Rupert Everett
Writers:
Rupert Everett
Studio:
Lionsgate Films
Genres:
Drama

Reviews (10) of The Happy Prince

Unless you are familiar with the literary giant that was Oscar Wilde - his aestheticism, his wit and the wonderful literature he gave to society - his genius may not be appreciated from this portrayal of the sad and seedy life he led after being released from prison and which had very little of the flamboyance of his earlier life. Unless you are in the know, it may also be difficult to understand who the acquaintances from England are that come back into contact with him during the dark days of his exile and his not too distant demise. The film was written, directed and starred in by Rupert Everett. It's obviously a labour of love for Mr Everett and has resulted in a magnificent film which I thoroughly enjoyed. He has done himself proud. I loved the way he entwined Wilde's children's story of The Happy Prince with what was happening on screen towards the end. This reduced me to tears, as did the story when I originally read it years ago. Emily Watson also gave an outstanding performance as Wilde's wife, Constance. Attention to detail with the period clothing is also to be applauded as are the very lovely locations in France and Italy. .

A brilliant piece of work by Rupert Everett all round, intelligent, interesting and a delight to watch, amazing really focusing as it does on the morally questionable and rather seedy last years of Wilde's life: Thoroughly enjoyed it.

The multiple flashbacks make the structure of the film confusing. The film jumps all over the place: from Wilde's theatrical triumphs to the humiliation of incarceration, to his relationship with his children. But Everett's main interest seems to be the depiction of depravity, decline and excess. He gurns through strange facial prosthetics, as we follow Wilde in the grip of addictions to alcohol, food, drugs and sex with under age rent boys, and gay orgies. Throughout the film he intones the story of The Happy Prince, which only underlines the maudlin sentimentality of the film. 'Wilde' with Stephen Fry is a much better film.

I loved this movie. OK it's half in French and that may put some people off - but so what? Just read the subtitles (though the spelling in some is atrocious - 'storeys' for 'stories' for example).

I found this way more moving and interesting that Stephen Fry's very self-indulgent 'Wilde' film too.

Despite the mediocre reviews of some critics, I am giving this 5 stars. I found it interesting, beautiful and moving.

Bravo Me Everett for giving us a detailed film about the life of Oscar after he left READING Jail. I was totally enthralled with it and the host of British acting talent providing performances to savour. Whether intentional or not the film did make me wonder whether Lord Alfred Douglas really loved Oscar or was he using him to get back at his own father? We shall never know!

Congratulations to Rupert Everett - The Happy Prince review by VS

For Rupert Everett, this film was the project if not of a lifetime, then of many years of struggle to obtain the funds to make a great art movie. He gives his thanks to his friend Colin Firth for lending his name (and presence) to the film. Without his backing it would have been even harder to raise the money. Everett gives the performance (probably) of a lifetime and shows a marked proficiency in French and also tolerable Italian. The other actors are also very good with Boysie looking the part and also giving a very credible version of the young and monstrously selfish Alfred, Lord Douglas. What gives this film an advantage over some other versions of Wilde, is that it looks at the shabby, seedy and sordid post- Reading Jail years. Everett inhabits this older sadder Wilde and through being gay and learned he gives us a very credible version of what it was like to be gifted, gay, ill and down on one's luck in Paris at the end of the 19th century.

A wonderful of telling the story of Oscar Wilde through the lens of his last days in Paris. Excellent acting throughout and very convincing relationships. Fascinating insight into his last years and days after his release from Reading jail. Told largely in flashbacks so be prepared to do a bit of work to understand the chronological sequence of events if you do not already know his story. A tale of love, redemption, celebrity and decline.

Rupert does Oscar, but in best possible taste. - The Happy Prince review by NC

Reminds me a bit of Alan Badel somehow. Another great actor. Maybe it is the way you can hear what he says, even in French! Dissolute Oscar for sure, bit away from his initial celebrity status.

Today he would have a top talk show, and be sought after in all the best media circles.

For Ready Money, Sir - The Happy Prince review by CH

What is it that makes one return to familiar tales? Time and again, a book appears about, say, The Beatles; one knows that it will probably not add much, if anything, to all those chronicles that have previously sat upon one's lap, and yet, and yet. Perhaps it is a return to childhood, when repeated readings of a book were demanded of one's parents. That is an apt observation to make, as it happens, of The Happy Prince (2018), for it opens by turning a variation upon the equally much-told life of Oscar Wilde.

He is sitting beside a bed in a Chelsea house and reading the eponymous fairy tale to his two young sons (they straddled an era: one died in the Great War, the other lived until 1967: “All You Need is the Love That Dared Not Speak Its Name”).

With which, its cuts away to a cross-Channel ferry at Dieppe in 1897, two years after the author had been consigned to two years' hard labour in Reading Gaol, a glittering career snuffed. Here, in a film written and directed by Rupert Everett, as well as featuring him as Wilde, one finds him during the two years before he expired in a cheap Paris hotel.

This is promising. So many accounts of Wilde pall after his three Trials and his incarceration. They were certainly dramatic. And yet so much happened afterwards. His eagerness to meet again his wife Constance (well depicted here by Emily Watson), his fatally succumbing again to Lord Alfred Douglas, the allure, in free-and-easy Naples, of youths whose trousers fall to their ankles for a consideration.

What is so often overlooked is that Wilde could have been on the cusp of a return to creative fervour. Not only was there his great Ballad, but he sold the outline for a play which one wished that he had written himself - and he set about crucial additional dialogue for the first published edition of The Importance of Being Earnest.

Naturally, textual emendations - a man sitting at desk with a pen - would hardly be the stuff of a gripping film, but this one lurches far, far, too far in the opposite direction. Blink, and the scene has shifted several times, which would surely be to the bewilderment of those who have no idea who Robbie Ross might be.

Here, amidst contemporary techno music, with suffocatingly dramatic lighting - whether in seedy hotel or music hall -, is Wilde as pop video. One would not be surprised if Elton John's “I'm Still Standing” blasted from the soundtrack (and one suspects that Wilde would have enjoyed its well-muscled video).

For all this, we could yet find a sequel. There is no doubt that Rupert Everett makes a great Wilde, the best on screen. One should like to see him directed by somebody else: as the Wilde who, in Worthing during the summer and autumn of 1894, was at work on Earnest in the company of his family while trying to accommodate visits from Douglas - and enjoying trysts on the seashore which, observed by agents acting for Douglas's father, would be re-played in the High Court soon after that play had been briefly acclaimed as the masterly depiction of the subterfuge to which Wilde awoke day after day.

Dull and self-indulgent - The Happy Prince review by TE

What a fascinating period in Wilde's life to use as a plot. And what a wasted opportunity. Everett seems intent on demontsrating how good his French is and in allowing the camera lingering close-ups on his ravaged visage. There is precious little wit in this film, and the minor characters (everyone is minor compared to the 'star' and director) are not put in context or allowed to develop. Cannot imagine why Colin Firth was in this merde.