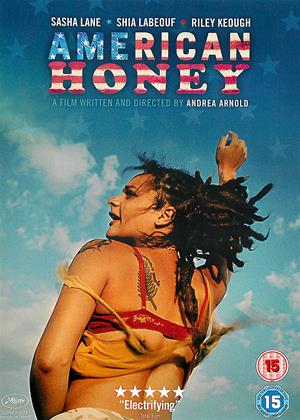 Well, that's 2 and a half hours of my life I'm never getting back!

Just think, classic movies like Spartacus and Ben Hur was were as long or longer, and last long in the memory as classics because they told a good story well.

This is not a good story and what non-story there is does not get told well - it's all episodic with the massively over-rated working class/underclass (AKA chav) female director Andrea Arnold slipping in her trademark explicit (ie real) sex scenes.

Want to know where National Lottery funding goes? It goes on this tedious, pretentious drivel.

It would be rubbish if it were 90 minutes but at least you'd have another hour of your life to play with.

I hated all the characters - typically messed up, childish losers of the type one sees at music festivals. This lot though are more like white chavs in inner city Britain, so 'act black', calling each other the N word and listening to obscene rap and hip hop.

By the end of this, I was hoping the minibus carrying all the irritating crusties on their way would drive off a cliff or burst into flames - and the lead actress is SO annoying and miscast too.

It beggars belief how such tosh gets made.

One star, for the scenery.

Andrea Arnold beautifully captures America that's usually unseen. Shot in academy ratio which enhances the focus of the story of an 18 year old woman, her vulnerability and strength. She is trapped by circumstance, by others, by society - within the frame - and we will her to break free.

The performances from unprofessional actors are fantastic - lost souls wandering through the sublime and mundane landscapes of the USA. Arnold allows their free spirits to make a life enhancing movie despite the grinding poverty and narrow middle class lives we witness.

Great review from PV. You only need to watch two minutes of this to realise what you’re in for – in-yer-face handheld close-ups of chain-smoking low-lifes you wouldn’t want to spend more than one minute with. If there’s any place for this kind of poorly directed miserabilism, it’s the TV. Why does the Lottery Fund continue to finance British directors who have so little sense of film that they don’t even know how to handle a camera?

Yes that's the plot...The characters never really led the film anywhere either, there might have been some deeper meaning but it was lost on me. The "story" (such as it is) might have been a good idea in somebody's head at some point but simply does not work as a film. On the plus side the film portrays a side of the US that Hollywood and others likes to keep hidden so I can partly forgive it for that....

American Honey is a compelling and gritty thriller that most moviegoers would rather opt for something else instead. Plus, the film has that mesmerizing quality that both attracts and repels at the same time, which also leaves you petrified as the events from the film rapidly roll over (and evolve) before your very own eyes. To this extent, one can assert that American Honey is a rather bold, and hopefully not last, experience from the mind of visionary director Andrea Arnold. Also, Shia LaBeouf is in this film, which is an additional reason why you should see the movie, like right now.

The film follows protagonist Star (played by Sasha Lane), as a stoic but deeply bittersweet person whose emotions resurface when she’s cornered and has nowhere to go. Then comes Jake (played by actor-turned internet sensation Shia LaBeouf), whose antics never cease to amaze me both on and off the screen to an equal measure. Here, Shia is Jake, a raging, compulsive, and a massively underachieving individual who wants to see other people succeed, but not at the expense of his own personal gains. Let’s face it: Shia LaBeouf is a force to be reckoned with whenever he pops on the screen, and his presence in American Honey is as compelling as ever.

Granted, American Honey is at times exercising stereotypes, depicting a European’s view of how the States look like from outside its borders. And the view is not at all pretty: compromising one’s own values in order to achieve some financial stability and emotional gratification; pursuing opportunities despite knowing their gray moral nature; throwing your friends ‘under the bus’ so that you can see some monetary gain in the meantime; and finally, a decadent society where the rich become richer and the poor are left to gather the scraps of the former. To this extent, it seems like American Honey’s reality is cruel, very relatable, and depressingly pessimistic as well.

Worth stating is that the actions of the disenfranchised individuals is what gives the main character Star agency; it’s the interactions between her and the marginalized people that ultimately define her bearings in light of her upcoming challenges in life.

In addition, some may find (presumably those with short attention spans, which are most people nowadays – me not excluded) the film as overly long and somewhat boring. If you find yourself among that target demographic – then it’s probably best if you skip the movie altogether.

Finally, enjoying American Honey will take at least some work on your part, meaning the film can’t be actually enjoyed by turning all of your synapses and nerve endings off. Or in other words: American Honey is everything but dumb fun, with its chaotic demeanor earning a top place among the shelves where master pieces reside.