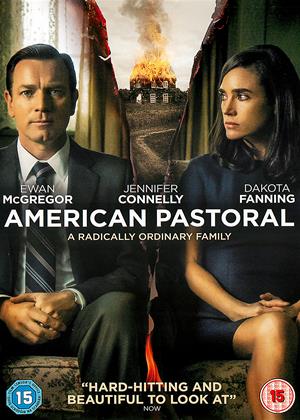 Ewan is a bit small for US football hero? - American Pastoral review by NC

The stutter thing is not well done, nor the brother's old-look make-up. Tends to lessen the whole cred .

Not a barrel of laughs, and trying to make some random point, that is a bit unsure.

Depends a lot on era. Was obviously squeaky clean and precise everywhere in early 60's America?

Never realised they had so many anti-war terrorists and bombs etc at the time. Certainly not well reported over here..........

Take the United States and all the turmoil that’s taken place during the 1960-s – among heated political debates, call to violence as a solution to change (at the time) current matters, rallies against the Vietnam War, the height of the American Civil Rights Movement and various chaotic tendencies not seen since the peak of WWII (not in intensity, but in high moral investment). American Pastoral depicts a concerned family amidst these issues that impose devastating consequences upon everyone affected by such radical change, and test a man’s will to stay and persevere whilst different factions want the sole opposite of that.

American Pastoral by director and actor Ewan McGregor tells the story of Seymour "Swede" Levov who had it all in life: he was a college sportsman star, he later went on to marry a former beauty queen (Jennifer Connelly) and he inherited his father’s business of manufacturing high quality women gloves. Afterwards (if it wasn’t good enough), Swede and his wife settled in an idyllic pastoral surrounding with vast amounts of land and a beautiful house in which they raised their daughter Merry (Dakota Fanning). So far, so good.

But life had other plans for the three of them.

Swede, being the all-rounded man among the Jewish-American communities in the city of Newark, soon started to cast glimpses of his ultimate downfall in the future. He entered in constant battles with his conservative and rigorous father Lou (played by Peter Riegert) to accept her wife’s Catholic faith; he also faced numerous problems with his business in wake of declining customer demand. But, the field where Swede had to endure the most is battling the unpredictable temper of his daughter Merry.

Merry’s problems stretch far and wide: her naïve look at the world (which she mostly consumes through TV and propaganda) leaves her wanting to join the American Civil Rights Movement because “it’s the right thing to do”. Meanwhile, given her stuttering, she constantly lives in the shadow of her mom and probably this would come off as the main reason why she rebels so hardly against conventions already set in place. One day, as a post office burns up in flames after an explosion – Merry is nowhere to be seen. Swede and Dawn both feel devastated and directly responsible for her sudden disappearance.

The post office bombing brings the police and FBI right at Swede’s doorstep. They’re convinced that their beloved daughter did the horrific act, a seed which will lead her mother Dawn to experience a nervous breakdown – convinced that Merry was standing behind the bombing. On the other hand, Swede never gives up hope and continues to look for his daughter because all that matters to him at this point in life is to find her and bring her home, regardless of her unproven guilt.

American Pastoral is Ewan McGregor’s first directorial feature, and, despite some holes in the storytelling, is a solid piece of cinema that is worthy of a look or two.