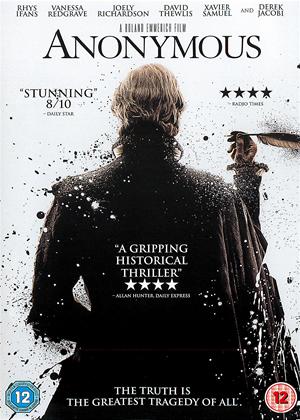 This film tells what is, to be honest, a very plausible view as to who the real author of Shakespeare's works was. Whether you agree with the way the film tells the story or not, to me, does not affect the enjoyment of the film. The angle of the film is that Shakespeare was a 2nd rate actor who seized an opportunity to take advantage of Edward de Vere, Earl of Oxford, who the film portrays as the real author of the works. The film is very well acted especially by Rhys Ifans who I have not seen better in a role. The whole supporting cast is excellent and the story zips along at quite a pace. Roland Emmerich (of blockbuster disaster movie fame - think Independence Day) directs very well although there is a touch too much green screen CGI of old London (although they probably had little choice). In summary the film is an enjoyable period piece filmed with a sizeable budget with a good script and excellent performances. The only issue is whether you believe the story. It's also worth watching the disc extra regarding who wrote Shakespeare's plays as it adds some more insight into the background of the story. The Blu Ray scores 4.5 for picture quality (detailed image with no grain) and 4 for sound (strong soundtrack and some detailed use of the rear channels).

An interesting and entertaining story if you can get past the fact that the whole storyline is rather risible. Not only are we meant to believe that Shakespeare didn't write all those plays (which might be arguable), he also is portrayed as an illiterate yobbo. In addition, a number of illegitimate royal offspring appear with potentially hilarious incestuous consequences. But it is a good story, well presented and pacey.

A historical political thriller starring Rhys Ifans, Vanessa Redgrave, Rafe Spall and David Thewliss Anonymous is based on the conspiracy that William Shakespeare’s plays were in fact penned by The Earl of Oxford, Edward de Vere.

Whether or not you agree with this idea doesn’t prevent Anonymous from marching right on in and doing everything within its power to convince you otherwise. It is an articulate, interesting movie that sparks with lust and greed and jealousy.

The character of Shakespeare is depicted in no way I have ever seen before; he is emotionally and intellectually stunted, barely more than the village idiot, making it impossible to believe that he could possibly have penned such masterpieces as he are afforded him. Instead Rhys Ifans plays a graceful and almost awe-inspiring character of intelligence, charm and presence.

The movie is set against the backdrop of the attempted Essex Rebellion, in which the Earl of Essex attempted to overthrow Elizabeth I played by both Vanessa Redgrave and her daughter Joely Richardson. The movie goes as far as to suggest that de Vere was even the Queen’s lover in her younger days and that it was she who inspired some of his most memorable and romantic moments.

Even if you believe the key aspect of the plot to be nonsense or the hidden truth, Anonymous is a sparkling two hours of fantastic dialogue, acting and set design that culminates in the creation of a highly entertaining and evocative drama.