Rent Attack of the Lederhosen Zombies (2016) 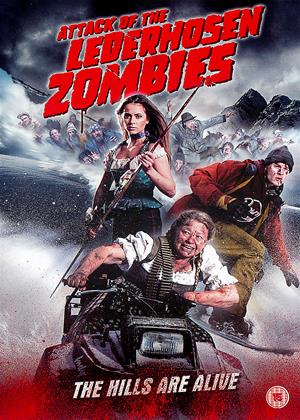 Rent other films like Attack of the Lederhosen Zombies

Reviews of Attack of the Lederhosen Zombies

Attack of the Lederhosen Zombies is a zombie film, no doubt. But where it thinks it differs from other films of the same genre – it actually doesn’t. It’s kind of hard to explain really. Given Romero’s convention of zombies as we’ve all come to know and love today, and given the sub-genre of zombie satire it sprung from such convention - Attack of the Lederhosen Zombies just follows the latter really. However, the film is not about story, or acting, or anything in-between: it’s a black comedy gore fest that would make you remember what you had for breakfast.

A gorefest and a cringefest all at once - Attack of the Lederhosen Zombies features some of the more creative ways not yet included (as far as I know) in those ‘how to kill a zombie’ manuals. Well, you can scribble off your list now, since this strange little German-American film has it all: scooping the eyes of an unsuspecting zombie by utilizing, no more or less – ski poles; decapitating several zombies with snowmobiles simultaneously; burning, crisping and devouring THE zombie essence by flammable materials and many, many other creative ways of total zombie annihilation.

And while feeling new, these ‘zomedy’ (zombie + comedy) flicks started getting out of hand lately. Just as the superhero genre, the zombie genre has also reached the apex of saturation and is slowly becoming more and more watered-down until it reaches zero. Zero as in ‘oh no, not THAT kind of movie again’.

Still, there is a decent amount to be had with Dominik Hartl and Armin Prediger’s Attack of the Lederhosen Zombies, as long as one shuts down rational thinking and blows logic right out of the window, especially when it comes to the film’s plot. Which goes something along the lines of a mad scientist who wants to change the world and prevent global warming with a ‘machine’ he’s built – only to find out that his so-called machine turns ordinary people into flesh-devouring creatures known as zombies. As ridiculous as it may sound, the filmmakers still cared enough to develop the backstory to an extent that is both satisfactory and relevant in the overall picture.

The film also features a romantic aspect between the two leads that doesn’t always work as it should. Sure it’s funny and subversive (making love while bathing in blood-soaked snow and zombie guts), but it also comes off as forced at times to an extent it becomes boring.

Ultimately, Attack of the Lederhosen Zombies abounds with great amounts of fun, gore and European people high on schnapps. If this would be your preferred pick of how to spend your weekend, then go ahead: I won’t stop you.