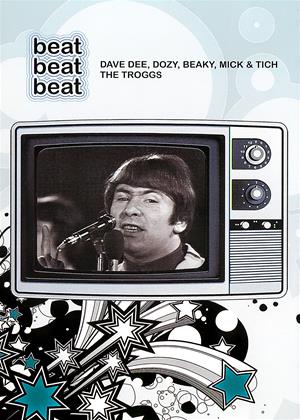 Synopsis:
"Beat Beat Beat" was a German music programme that ran during the sixties. Not to be confused with the other well known German pop programme Beat Club, 'Beat Beat Beat' was broadcast out of Frankfurt commencing in 1966. The programme ran to 26 episodes between its launch in 1966 and the final programme in January 1969, all of which are still in the German television archives. The shows were eclectic affairs and included performances by artists as diverse as Eric Burdon and the New Animals, The Move, Cat Stevens and Barry Ryan to name just a few. This compilation includes performances from Dave Dee, Dozy, Beaky Mick and Tich and The Troggs.
Dave Dee, Dozy, Beaky, Mick and Tich featuring former policeman Dave Dee put in an energetic performance that includes the hits 'Bend It', 'Hold Tight' and 'Save Me'. Also featured here are The Troggs who burst onto the music scene with the song Wild Thing. Here we find the Troggs performing follow up singles, 'I Can't Control Myself' which reached number 2 in the UK charts, and 'With a Girl Like You' which went one better and made it to number 1. Both were massive hits from the band from Andover, in Hampshire England.

Sign up
The Moody Blues: Days of Future Passed: Live