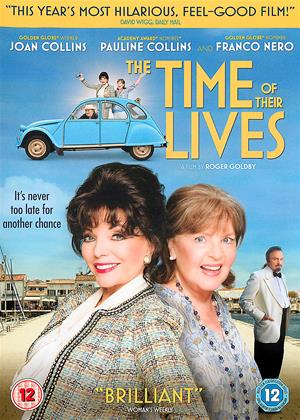 Reviews (3) of The Time of Their Lives

Ridiculous boring film - The Time of Their Lives review by DH

It feels a bit like a really bad remake of Shirley Valentine with Shirley being 30 years older. It does not have the charm of the first movie mostly due to Joan Collins appalling acting! She only limped when she could remember.

All I can think of is that Joan and Pauline must be friends and fancied a jolly in France! Avoid!

Easy to watch - The Time of Their Lives review by EH

Gentle fun comedy. Not much to laugh at but smiled a lot. Joan Collins played the diva very well.

Here's a nice gentle film about 2 more mature women who somehow end up on a romantic adventure in France.

It starts brilliantly - and I love the harsh Romanian 'care' worker hectoring the elderly people onto the coach.

As it goes on the plot becomes more and more unrealistic and silly. Totally unrealistic plot - esp around customs etc.

But it's all so charming I can forgive that.

The Time of Their Lives review by Adrijan Arsovski - Cinema Paradiso

The Time of Their Lives is, plainly stated – a road-trip film, similar in likes with Thelma and Louise and other intentionally-charming cinema pieces targeted towards the elderly demographic. And you can tell: the film is gleaming with deliberately sweet moments, seemingly charming developments and quirky characters…you get the overall idea. But the real question is: is The Time of Their Lives good enough to warrant a viewing? And the answer to that is, well, it depends on what you mean.

The film revolves (well, mostly anyway) around Helen and her accidental friend Pricilla (played by Joan and Pauline Collins respectively); these two unlikely companions get together mostly on the grounds of their differences, but as time goes by, they slowly start finding out how in fact similar they are.

Priscilla is charming and a generally likeable person. Unfortunately, her husband treats her unfairly and she finds herself living a physically comfortable, but mentally destitute life. And so, by incidence or chance, she stumbles upon the trip of her lifetime together with Helen.

Helen on the other hand, is still living in the past. She is a former movie star whose star has faded long ago, and now her mental image is shattered to pieces. On top of that, she’s also a narcissistic person, which doesn’t help her in the least. And thus, Helen is in constant inner battle between what she is, what she was, and what she could’ve been.

Additionally, there’s a small part assigned to none other than spaghetti western’s very own Franco Nero as Alberto. He’s quite the charming fellow and shows Priscilla what she could’ve had if she wasn’t still putting up with her husband’s bad antics towards her.

And so we have a roadtrip but for the elderly – which is where the majority of the meat of this film lies. The two leads (Joan and Pauline) have great chemistry together and this is rightly so, since the two of them have been acting for how long together now? In fact, Helen and Priscilla constantly banter on how there are no more good roles for older actors and actresses, mentioning films such as RED, Going in Style, and The Best Exotic Marigold Hotel, to state a few. This goes for quite some time and ultimately ends up leading nowhere in particular. And so the two heroines move on by going about with their days.

Narration-wise, The Time of Their Lives is not Oscar-material, neither a razzie one. All the elements that make a good film are there, but just few are kicking. The rest of it feels somewhat disjointed, which makes me point out to the cutting room and put them to blame. Other than that, The Time of Their Lives is a genuine act of cinema suitable for anyone re-examining their lives, especially those who find themselves overwhelmed by the sands of time.