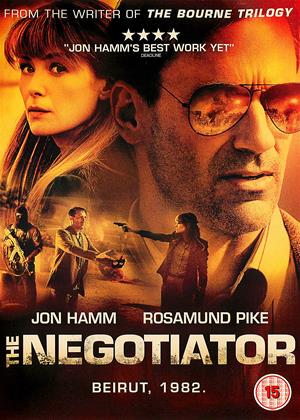 Synopsis:
The collateral damage of civil war is all-encompassing and unforgiving; a brutal setting for tense negotiations, especially when the results could have monumental consequences. Jon Hamm and Rosamund Pike star as CIA agents in this nail-biting intelligent thriller. In 1972, former US diplomat, Mason Skiles (Hamm), was caught up in a terrorist attack that changed his life forever. 10 years later, whilst working as a mediator in Boston, Skiles receives an unwanted invitation to visit Beirut, a territory plagued by war and violence.
Quickly dragged back into the system he hastily left, Mason is assigned a mission of negotiating a swap with a terrorist group: a kidnapped American CIA agent for a terrorist leader. 'The Negotiator' is a suspenseful drama that questions government loyalties, how far one person is willing to push themselves in the pursuit of justice and where the moral line in the sand is drawn when faced with the severest of situations. Clandestine operations and a web of intrigue intertwine.
Actors:
Jon Hamm, Jay Potter, Khalid Benchagra, Ania Josse, Angus John Crisford Pritchard-Gordon, Yoav Sadian, Leïla Bekhti, Kate Fleetwood, Mark Pellegrino, Abdesselam Bounouacha, Colin Stinton, Mustapha Touki, Youssef El Hibaqui, Aziz Attougui, Hichame Ouraqa, Charley Broderick, Ian Porter, Nick Holder, Neal Huff, Shea Whigham
Directors:
Brad Anderson
Writers:
Tony Gilroy
Aka:
Beirut
Studio:
Signature Entertainment
Genres:
Drama, Thrillers

Reviews (6) of The Negotiator

This film demands concentration - it's got quite a complex and winding plot AND some characters look very similar, so the viewer has to keep on his toes! I used subtitles too and rewound at certain points.

Some thrills and spills, with plot twists and it all shows how confusing and confused the tribal warfare in Lebanon is - with the PLO, Christians and Israelis all at each others' throats. Worth watching with the great animated movie WALTZ WITH BASHIR (which explains the history and politics) and maybe the film LEBANON too.

I enjoyed this BUT hated the way so many scenes took place in the dark. Really annoying!

Also the alcoholic has-been called in for a special mission is SUCH a cliche.

Ultimately depressing - hard to think that Beirut used to be somewhere like Cannes, or Monte Carlo, where the rich went. These places and many others were arguably better under colonialism by European powers - which is not a pc thing to say, but true, none the less. Ditto with Africa.

Around 3 stars. Would be 4 were it not for the confusing casting, the slowness at the start and the plethora of scenes shot in near-darkness!

There is something satisfyingly 'old fashioned' about this film which doesn't rely on special effects or jumpy camerawork to convey atmosphere but depends instead on dialogue and a narrative in which the tension steadily grows to its dramatic conclusion. It was much better than I expected and while not one of the greatest films of all time was very enjoyable.

After a promising prologue we jump 10 years and it takes an age to develop a plot about Jon Hamm negotiating with kidnappers in Beirut. Cue lots of shots of local colour and political machinations, all of which lose their impact by being set decades ago in 1982. Any twists can be seen coming a mile off. He’s given a tracking device in his trouser belt, but when his fellow agents follow it into a tough spot.. and the tension builds… he’s taken it off and is elsewhere. There’s an equally ridiculous plot point that plays on characters’ names. It does become more interesting as it develops but it’s woefully let down by a lack of imagination in the pacing and plotting.

fast moving and dramatic - The Negotiator review by OP

This is a fast moving, fairly dramatic film, which is very watchable. Without relying on special effects this film steadily builds tension, leading to a dramatic conclusion.

Refreshing to see a film that doesn't try to be too clever by half, or relies on CGI to make an impact. Well paced, it portrays the horrors of 1980s Beirut well, and is well acted. Recommended.

Zero out of 10 for originality.

Wisely, you may not have watched this particular film before but you will recognise oh-so-familiar scenes from other films & hear dialogue that is best described as "Here's some I made before". You know you're in uninspired company when an alcoholic character is seen pouring a bottle of booze down the sink merely to indicate to us that he is resolved to kick the habit.