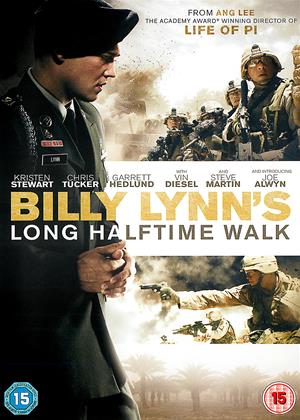 I had been wanting to watch this film for a while, due to my interest in cinematography coupled with Ang Lee’s very public endorsement of super-high frame rate shooting. Amusingly enough, even though this is at 60fps (frames per second) for the 4K Blu-Ray disk, the actual released film was 120 fps, which only a few cinemas in the world were able to show.

Whilst some people have criticized the film for looking more like a computer game than a film, due to the hyper-reality quality of it, I absolutely loved it. I can see exactly what Lee was trying to achieve and for me this film totally works in terms of how it is shot. Compared to Public Enemies, which was shot in the same hyper-real way but looked absolutely stupid due to it being set in the 1930’s, this absolutely clicked for me.

It’s a shame that the film itself wasn’t the home-run I wanted it to be. There is nothing much wrong with the premise; the performances, especially from Vin Diesel, Garrett Hedlund and Kristen Stewart are great, and the staging of scenes, especially in Iraq, are brilliant. But it just didn’t work as a film, it felt disjointed. And although that may have been the point, for me as much as it is a technical marvel, unless you’re watching the 4K UHD Blu-Ray, less-violent films like this play every weekday during the afternoon slot on Channel 5 and have pretty much the same impact.

There’s a strangely meta-commentary on media perceptions of the military within Billy Lynn’s Long Halftime Walk that feels strangely untapped. Perhaps it’s just too jarring to see a film where the true story of Lynn’s unit comes home from the war in Iraq to a very uncomfortable Halftime show with a movie deal bargained in between. I couldn’t help but feel there was something bigger here; something deeper than just the coupling of PTSD at a loud event that trots soldiers out as decorations for a parade, even more than the internal struggle of how little control a soldier has.

Directed by Ang Lee and based on the eponymous novel by Ben Fountain, the film is told in a non-linear fashion to give an all-encompassing feeling of the conflicting emotions between Billy’s tour and his group halftime appearance. Joe Alwyn plays Billy as the 19-year-old US Army specialist from Texas, seen during his October 23, 2004 firefight in Iraq and at the Dallas Cowboys Thanksgiving home game. During his time in Iraq, he functions as a more controlled and driven soldier. Back home, he’s suffering from PTSD, denying its effect when he clearly can’t handle the loud noises of a concert or the fast-talking of suits trying to sell his story. He’s not alone in either scenario as his comrades all serve along side him but he’s more alone than he wants to admit.

This film brings up a lot of conflicting emotions a soldier like Billy would experience but says little about them, as though Lee is fearful to tap into something far grander with the exhaustive experience for someone like Billy. He has a meet and greets with many Americans that echo the same sentiments he has heard to death; blind support and ranting about how the Middle East needs a good bombing. He ignores calls from his doctors about getting some help. He deals with a slick-talking agent (Chris Tucker) trying to score him and his men a movie deal, while a snooty football team owner (Steve Martin) offers a lesser deal. It’s too much that by the time the soldiers start a fight with angry stadium staff, it’s expected.

But for restaging the grand display of a halftime show and recreating the violent events of the Iraq war, the film ultimately says nothing all that substantial, merely giving us all the ingredients of the era but never stirring them together. Perhaps that’s the point, driving home the point that Billy is baffled and taken advantage of by the bigger picture he cannot see. He at one point asks his superior officer during the halftime game if he had a choice would he go back to Iraq. The officer states that’s not his place to say; he doesn’t make that call. Billy asks again as a hypothetical but is given the same answer. You don’t have choices as a soldier. Even the telling-off the soldiers give one prodding oil investor comes off more distant than meaningful, more of a don’t-tell-us-how-to-do-our-jobs than a you-don’t-know-what-it’s-like.

I wish I could admire Billy Lynn on this level but the story, unfortunately, stirs up the drama with less realism. I give kudos to Tucker and Martin being understated in their roles, which is no small feat when they’re playing men who look down on or won’t fully support the troops. And for bringing up aspects of blind support, oil for blood in Iraq, and the Hollywood perception of the military, there’s a lot brought up and little of it paying off. While the film does give us a perspective of the coming-home soldier experience, it’s seen through a very dim lens of familiar Hollywood tropes and dressings that could have been given a savaging had the film picked a singular target.