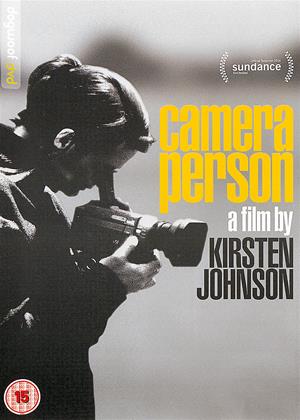 Synopsis:
What does it mean to film another person? How does it affect the person - and what does it do to the one who films? A boxing match in Brooklyn; life in post-war Bosnia and Herzegovina; the daily routine of a Nigerian midwife; an intimate family moment at home: these scenes and others are woven into Cameraperson, a tapestry of footage captured over the 25-year career of documentary cinematographer Kirsten Johnson. Through a series of episodic juxtapositions, Johnson explores the relationships between image makers and their subjects, the tension between the objectivity and intervention of the camera, and the complex interaction of unfiltered reality and crafted narrative.
A work that combines documentary, autobiography, and ethical inquiry, Cameraperson is both a moving glimpse into one filmmaker's personal journey and a thoughtful examination of what it means to train a camera on the world.
Actors:
Kirsten Johnson
Directors:
Kirsten Johnson
Producers:
Kirsten Johnson, Marilyn Ness
Writers:
Doris Baizley, Lisa Freedman
Studio:
Dogwoof
Genres:
Documentary, Special Interest

As a pro photographer I was interested to see this film. After 10 minutes I couldn't watch any more. Never seen such drivel in my life.

Cameraperson is directed by documentary filmmaker Kirsten Johnson in a way that tells a myriad of stories that ultimately distill to one, very personal, very human experience – that of Kirsten and her inner journey of self-discovery and growth. To this extent, Cameraperson feels honest, alive, sometimes off-pace, but more often than not it plays like a window to Kirsten Johnson’s own soul (whatever that word may entail to you). And so, to call Cameraperson a patchwork would be an understatement, yet to call it a film would also be not entirely true. So, what is Cameraperson anyways and why should we care?

The film starts off clunky, as in it doesn’t feel as it has much direction or any cohesive structure to it. So, the narrative thread (of course there’s a narrative thread; even Baraka and Samsara, two films with zero dialog, have that) jumps between scenes Johnson’s shot in the States and places in the Middle East as well. In fact, we see this “cameraperson” travel as far as the African continent goes, bringing back beautifully shot memories that make the whole experience that much wonderful and surreal. But I guess I digress?

Cameraperson really starts going in the second half of the film, with huge pay offs that no one could’ve seen coming. Take for instance the story of the Nigerian nurse, who does her best to deliver a baby and later goes to deliver another baby for what happens to be a set of twins. All of the above is delivered through the natural, or rather humanistic lenses of Kirsten Johnson in a cathartic ending to a segment of purely human nature. If anything comes even close to depicting real life on screen – this would most certainly take the cake, and then some. Funny thing is, Kirsten cuts away from this thread but comes back at it at the one-hour mark in the film: the same baby is in danger of dying.

Another thread comes in the form of a boxing match. Kirsten utilises the same techniques of not showing everything in the first bout. As was the case with the Nigerian hospital, she cuts back to the boxer and his lost match, as he tirelessly but understandably has a major breakdown back in the locker-room. This is as raw as it can get and there isn’t any sports drama that can come close to the approach that Kirsten’s using.

All in all, Cameraperson by Kirsten Johnson is a surreal masterpiece in documentary filmmaking that would probably wind up unappreciated on a shelf somewhere at your grandparent’s house in 30 years’ time. Case in point: watch it now so that you’d know what in the hell I’m rambling about here.