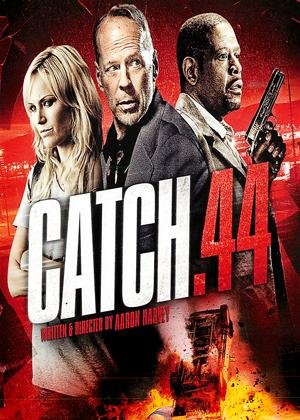 Three pretty ladies sit in a diner and gab about sex. Typical day at the diner, right? Wrong. In truth, Tes, Kara, and Dawn are in for a surprise – and when guns start a-blazing, someone will turn up dead. This is ‘Catch .44’ from writer-director Aaron Harvey, a Quentin Tarantino-wannabe indie picture that puts in the effort but doesn’t really achieve success.

Turns out Tes (Malin Akerman), Kara (Nikki Reed), and Dawn (Deborah Ann Woll) are strippers who work for their crime and drug kingpin, Mel (Bruce Willis). And they’re pissed, hence, the next best thing to deal with him. Oh, there’s a drug deal gone awry and also a serial killer pretending to be a cop – complete with uniform – on the loose, and he’s named Ronny (Forrest Whitaker). Everyone will be involved with each other at one point, and writer-director Aaron Harvey will give it to us in flashbacks.

As a stab on a Mexican standoff (that’s two or more people pointing guns at each other), witty dialogue, and stylized violence, ‘Catch .44’ is a welcome sight. But it’s not in any way trying to be original; in fact, most of its scenes are rehashes of other indie movies that make violence its main attraction. Given that it’s hard to be original these days, at least deliver something that’s totally a stamp by director Aaron Harvey. The cast does its best finely acting their way from a very thin script, but if there’s no meat to it, how the heck can they sell this thing?

‘Catch .44’ gives the veteran actors, Bruce Willis and Forrest Whitaker, their chances to shine as character-actors. When they really want to, they can showcase good oddball performances. More impressive is Whitaker whom is unpredictable with his nuances and especially the accents. Nothing politically correct about it, for sure. For the women, Malin Akerman, Nikki Reed, and Deborah Ann Woll are capable enough to be the kind of sexy you underestimate at first but regret you did later. That’s not an easy quality to muster. So don’t mess with the ladies.