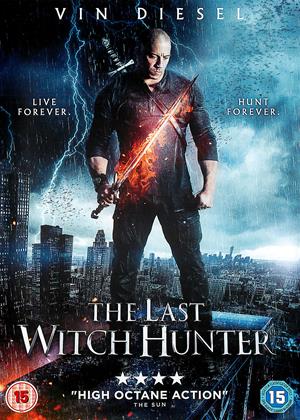 Reviews (3) of The Last Witch Hunter

Micheal Cain is not the star of this film, so stop complaining. - The Last Witch Hunter review by ME

Personally, I found this to be Vin's finest acting yet! Note that I have only ever seen him as Riddick, not any of his other movie franchises. If you enjoyed his other sci-fi/fantasy type movies then this shouldn't disappoint.

I personally couldn't tell you what the review complaining about "a boring rehash of other horror action films" was on about because this isn't horror. It's sci-fi/fantasy. But then they, along with the other one complaining about it because they expected more from Micheal Cain, presumably only watched the film because he was in it. His name isn't even on the cover. He only appears on screen for a short amount of time. Get over it.

is this worth renting? - The Last Witch Hunter review by Alex & Sue

in a word, no. what a heap of terribly acted tripe. Bad story, script and generally weak. The best but of it was finally seeing the credits coming up. what a waste of Micheal Cains talent! Avoid! ??

After a promising pre-credits sequence we get down to a boring rehash of many horror action films seen before. Why the likes of Michael Caine and Elijah Wood got involved is anyone's guess.

Vin Diesel’s supernatural action picture The Last Witch Hunter is very Vin Diesely if you catch my drift. He hunts magical beings, shouts in faces, punches some faces, wields a big sword and rattles off ridiculous one-liners. Some of those one-liners even seem bafflingly laughable. When Diesel has his immortal prey on the ropes, he remarks that the best part of his enemy being immortal is that he can kill them twice. But couldn’t you kill them a third and fourth time? Wouldn’t you just be infinitely killing your enemy? And wouldn’t it get boring by the 250th kill? But now I’m over-thinking the sloppy writing of a forgettable shlock.

There’s not much a story to this tale that comes straight from the Vin Diesel action factory. Diesel plays a witch hunter for the modern age. Elijah Wood is a witch hunter apprentice. Michael Caine is an older witch hunter. Rose Leslie is a witch turned witch hunter. All the characters simply fulfill these roles more by script than by character. They’re not allowed to emote too much or escape outside their expected arcs. It’s debatable whether this was just the result of a lazy script or to make sure nobody outshines Vin Diesel. Elijah Wood is mostly playing it safe, Rose Leslie is a thankless female element and Michael Caine is probably wondering where his career went wrong.

For an unimpressive excuse for action, the picture manages to have some decent effects. Sure, there’s the standard black magic gas and some ho-hum particle effects, but there are some creative creations here and there. When a witch plans to resurrect herself, she embeds herself in a body that is trapped between growing vines. When the metamorphosis is complete, she rips off the human flesh to reveal her true self with a spine on the back of her head. It’s not too bad of an effect, but it makes me angry that it was so good. The special effects are the best part of the picture more than anything else. Vin Diesel at one point battles a witch with a flaming sword in his big hands. Not a bad sight, but it really does make you wish someone else were wielding that sword and that there was a more impressive opponent to use it on.

The witches themselves don’t have powers all that impressive. When one witch chooses a special death for someone who helped them out, her big move is to summon a swarm of bugs pick and chew on the character until he is dead. The body is not picked clean nor is it gored. Either the producers really wanted to keep that PG-13 rating or the bugs were on a diet. Similarly, Vin Diesel’s witch hunting skills are not all that impressive. His final move against the witch is the flaming sword. I guess it takes a bit of skill to swing that thing without burning yourself.

I feel bad that I can’t be more angry at such a lackluster picture since The Last Witch Hunter is exactly what it promises without surprise. If you’re familiar with Diesel’s other supernatural projects, you can most likely guess the entire plot. Force some story through Diesel’s bland acting, throw in some decent special effects and you have yourself another pointless bit of action built as a temporary time waster. You can expect to see this picture in the future with a discounted bundle package of Vin Diesel movies alongside Babylon A.D. and Knockaround Guys. Not the worst of Vin Diesel's career, but certainly another picture for the pile of bland. I can't even muster enough disgust since this isn't a picture anyone will overly praise or ridicule. Just take your two stars and get out of my sight, The Last Witch Hunter.