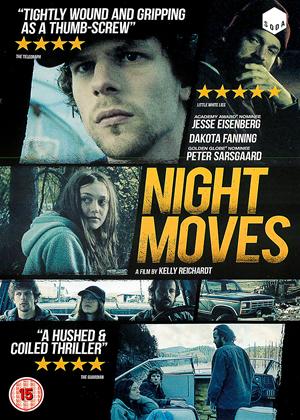 Story of three friends plan to blow up a dam, without knowing it killed a camper . The three friends go thier seperate ways and struggle to carry on with what happend.

I should be in the market for this film. I recycle my empty Captain Morgan's bottles and read the Guardian, but oh what a joyless experience watching it is. Reviews said it was a tense eco thriller. Er... hello?

An episode of Countryfile has more tension.

We don't even get to see the dam blowing up. You would think they could have stretched to splicing in a bit of old footage from the Dambusters.

And what is going on with Jesse Eisenberg? Did he forget all his lines? Did they not give him a copy of the script? He doesn't say anything!

He's a good actor but he's not one of the greats. He isn't Brando turning up his collar against the wind in On The Waterfront, the cogs turning slowly behind the eyes. He isn't DeNiro in Taxi Driver conveying a world of turmoil with a grimace. He's not even Shatner entertaining us with.... his.... efforts..... to...... re...member....... his... lines..... in early Star Trek.

This film is 113 minutes long. You won't get this time back. The sun is due to explode in approximately four billion years. Do something more constructive NOW to save the world people!

Go and make some of those recycled newspaper brickettes for your wood burning stove with that contraption you got from Guardian readers offers. Or stick a house brick in the toilet cistern in your en suite bathroom.

Oh but hang on! You read the newspaper online these days and you live in Sheffield and it's just started raining again.

Realism at its best - Night Moves review by DP

I find most thrillers to be very contrived; this one is paced at real-life speeds, and feels very natural as a result. Funny irony: in the first 5 minutes, I thought to myself 'this reminds me of Wendy & Lucy' (not knowing anything about the director) and later on I discovered it was from the director of Wendy & Lucy! Speaking of Wendy & Lucy, Dakota Fanning would have been ideal for the lead role, had she been old enough when it was made - she has a very authentic style that perfectly suits both movies (I always thought Michelle Williams was a little too snobby for the role of Wendy).

Night Moves is the type of quiet film that creeps under your skin with its quiet atmosphere of tension and guilt. It’s a slow burn that give us plenty of time to engross ourselves into the minds of these characters that believe they’re saving the planet. These are people who are so deep into their environmental cause that they seem completely cut off from not just the world, but themselves as well. It’s a rather somber tale for a plot that’s essentially about eco-terrorists blowing up a hydroelectric dam.

This operation involves three environmentalists deeply involved with their culture that they’ve gone almost completely off the grid. For most of the film, we follow Josh (Jesse Eisenberg), a quiet loner who seems to have many conflicting thoughts bottled up under his stone exterior. His two comrades are the feisty newcomer Dena (Dakota Fanning) and the veteran hippy Harmon (Peter Sarsgaard). With Harmon mostly in the dark when not delivering sage instructions, Josh and Dena spend most of the time working together. There isn’t much of a connection between the two with Josh closing himself off as Dena maintains her stoic dedication. The priority is their mission which they spend the entire first act preparing for. They secretly acquire a boat and the necessary materials required for assembling the bomb that will ignite their target with cunning precision.

After a tense journey to their goal maintaining their secrecy under cover of night, the hydroelectric dam is destroyed. The unfortunate consequence of their actions is that a nearby camper was killed in the resulting damage. While the three go their separate ways fleeing to their respective communes miles away, Josh is left a mental mess as he tries to grapple with what he’s just done. Maintaining his cover for the crime proves to be difficult when we see in his eyes the worry and panic.

One of Josh’s first horrible thoughts is that maybe the destruction of the dam didn’t accomplish anything. There are already plenty of them and this one would probably be rebuilt. Was it really worth all the effort and the loss of a human life? But what’s more pressing on his mind is the fear of getting caught. Josh doesn’t trust a single soul, leaving him alone to brood and generate awful assumptions. Namely, he believes Dena will crack first and views her as a huge liability. The distrust continues to build until it reaches a rather grim conclusion and a gut-wrenching realization.

The all-star cast delivers pitch-perfect performances with the subtlety. These are not just a bunch of punk kids who are trying to blow up dams based off a few books they read in college. They have completely immersed themselves into the self-sufficient world of growing their own food, keeping off the grid and the only movies they watch are foreboding documentaries on the poor state of the planet. This is a group so ingrained in their cause that any doubt or looking back will destroy their entire lives. Josh looks down into the abyss and starts to wobble within his mind. The entire time we spend after the dam explosion follows Josh just trying to do his job on the commune, living in constant fear of being uncovered.

Night Moves was directed by Kelly Reichardt who brings a unique style to this dark drama. There are several memorable shots as when our three main characters sit in a boat completely still, hoping not to be spotted by a stopped car on the mountain road. We’re placed right alongside them where we only see the car lights from a distance. The film ends with Josh looking up into a department store mirror and cannot see himself at an angle. It’s the one thing he and most people fear: losing humanity. This is very exceptional filmmaking for those who love to observe the conflicted mind with a fly-on-the-wall approach.