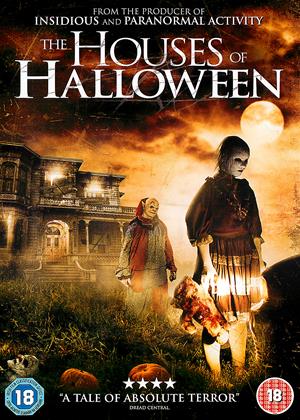 Reviews (3) of The Houses October Built

A group of friends are making a dedicated trip round as many haunted houses as they can, and their experiences get more and more extreme with mannequins and human attractions that appear not only to take their parts far too seriously, but actively appear to ‘live’ them. And yet the group solider on because of one of their number’s inexplicable passion for the project. Such a passion drives this and many, many other horrors – without the implausibility of pursuing something obviously dangerous, there would be no sustained jeopardy. ‘Now we have the chance to do something really cool, so just relax’ isn’t exactly a reassuring statement given the circumstances.

So while the bull-headed ‘character with camera’ has become a necessary staple of (most) found-footage films (Found Footage Syndrome - FFS?), it’s the fact that his friends go along with him that is difficult to rationalise. And yet despite this implausibility, ‘The Houses October Built’ is a tremendous fright-fest. Haunted houses, one after another, each resplendent with its own family of ghouls, freaks, lunatics, clowns and mannequins saturate the viewer in grotesquery; there is little let-up. The world becomes a line-up of the staggering, murderous and chuckling depraved.

Hillbillies, the scapegoat of horrors from ‘Texas Chainsaw Massacre’ to ‘Wrong Turn’ and beyond, are the suggested inbred monsters here. Although identities don’t break free from the costumes and masks, and personalities are removed, things become increasingly dangerous for our thrill-seekers. And, let’s be honest, it doesn’t end well for them. The idea of ‘found-footage’ is stretched into the realms of impossibility with us actually seeing the characters buried alive, each in their own individual caskets. This would suggest a multitude of webcams, and that the characters must break free, for the footage to become available to view!

But don’t let implausibility worry you; this is fine, depraved, worrying horror. Of all the skull-bearing lunatics and other assorted creatures, the most effective is a doll-like girl. Only on screen for a few brief scenes, she steals the show. Her posture, awkward movements and unearthly shrieking is enough to dish out true nightmares on her own.

Cant decide what is called.Film with soo many names ,Houses that October Built /Houses of Halloween - The Houses October Built review by porky

Pretty Low Rent FOUND FOOTAGE ,Fake Documentary movie about Sideshow Horror Houses . Starts off with Documentary Footage and soon becomes a group of 20 something's looking for thrills . Nothing Scary ,Nothing Frightening,Nothing out of the ordinary. pretty much what you expect from a Blair Witch Rip Off......only with a rather Dull Ending. Watch ONLY f you are thinking of getting Work at a Seasonal Horror House and want ideas for Halloween Outfits .mainly CLOWNS.

Haunt is 1000 times better than this trash. Nothing scary or even remotely interesting about this film. The filming is so amateurish as to make wonder whether it’s trying to be an abstract parody of found footage films. There is no development only the merest excuse of a plot, which allows one character to go “I’ve head shady stuff happens” and THAT is his documentary.  Every character is paper thin, and yet still manages to be annoying... but not so much that you want them to die, because that implies that you might care. They’re such abysmal nothings that you’d rather have the whole world end than have to actually spare them a thought. The ending - which might’ve rescued it to some small degree - is utterly tedious and feels like it’s been executed the way an unjustifiably confident teenager writes - no need to plan, edit or have a second look, for sure this’ll be gold: after all, we’ve got clowns and everyone thinks clowns are scary!

Please do yourself a favour and do not rent this. Rent Haunt (again if you need a haunted house fix) and avoid anything any of these hacks does in the future.

The Houses October Built starts out intriguing enough with a collection of news footage about haunted houses. Owners/actors are interviewed on their process, the mechanics of the craft are talked about and there is even some retro haunted house commercials. This could be cool if it were a documentary about the history of haunted houses. But, wait, where is this going? Found footage? No, bring back the actual haunted houses and actual people running them! Don’t leave me with disposable party-goers that are fodder for a haunted house gone wrong.

The movie teases the aspect of a documentary the way it follows these simple characters on a road trip to make a film about haunted houses. More news footage is inserted between each haunted house, further echoing the more interesting movie that wasn’t made. While this traveling group of amateur filmmakers do get some neat footage inside the haunted houses, most of their interviews feel like missed opportunities. Compare their interviews to actual TV news interviews with haunted house players. The reporters interview these dressed up ghouls and zombies about what makes their job so unique. Most of the questions by the documentarians are too simple and feel like a waste of an opportunity with such questions as “anything shady go on inside?”

On the hunt for the most legendary of haunted houses - one that is rumored to feature actual human body parts - the crew continue to probe and prod every attraction they can find. Of course, we eventually have to get to the moment where the haunted frights turn out to be a real danger. The plot takes a decent route by building a slow burn of the various scary figures tracking our travelers across the states, randomly popping up and acting in character. The tension continues to mount as more characters follow and strange gifts are left in the RV of the documentarians. Pumpkins with messages on the doorstep, cow hearts in the fridge, video of the travelers being filmed when they’re asleep - you know, the usual stalker affair for crazy Halloween people.

But the cry wolf aspect of the story doesn’t feel as though there is consistent build up. Most of the scares feel very random as if the movie is grabbing ideas out of a hat. The crew believe they hear something outside the RV as someone is on the roof. A creepy clown character stands in front of their RV in the parking lot just staring at them. By the time we get to the actual haunted house where our main characters are slaughtered for real, it’s completely underwhelming and without much surprise. What is the mysterious house of horrors that the characters stumble into? Who are its inhabitants? Why do they kill people? All questions that are never revealed or even asked by our main characters. All they want to do is film the most scary and rare of haunted houses. General safety and caution be damned.

As with most found footage films, this is yet another one that struggles to find ways to keep the cameras rolling. Even when the characters are kidnapped and captured, they still manage to get their hands on a filming device and keep the gimmick going. The movie struggles to find ways to position a camera as when characters are buried alive with a camera inside their coffin. What is the point of placing a camera in the coffin? Do they have a live feed to film all of this and archive it? Who knows. Again, I reiterate my position that these films should use camera glasses which can be left on and forgotten about. At least that way the audience won’t be constantly confused about who is filming the murders and why.

The Houses October Built offers up a documentary I’d love to see, but is hindered by a lesser found footage horror picture. The best that can be said is that the focus on haunted houses is given a charming sense of fun frights for entertainment. The footage shot inside the haunted houses are actually pretty cool with the perspectives and the atmosphere. I actually care about the presentation and construction behind these effective attractions. I just wish I cared as much about the characters who spend most of their time making lame jokes and smoking weed. The most good that can come from this film is that it will inspire some young filmmaker to create an actual haunted house documentary. I eagerly await that film which is teased too much in this standard bit of horror.