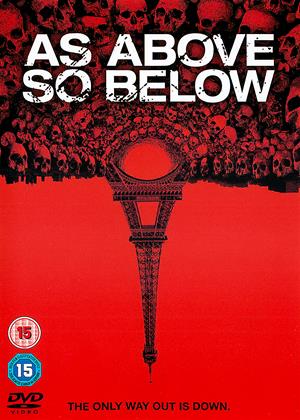 Reviews of As Above, So Below

As Above, So Below review by Mark McPherson - Cinema Paradiso

As Above, So Below is a horror movie where it’s not so much about what the characters do as what happens to the them. They jump down holes, scurry through tunnels and something may or may not jump out to spook or slaughter them. There are even a few noises in the dark and maybe a hand or two that emerges from a puddle of blood. It is all theatrics and little else, turning this into a horror movie that plays like a haunted roller coaster ride. The bad news is that even that audience is going to be let down by this long bore of a journey into frightful treasure hunting.

Told in the found footage format, an archeologist is hot on the trail of the legendary Philosopher’s Stone. Her path leads to the underground catacombs of Paris where she enlists the help of her ex as a translator and some punk kids as sewer sherpas. There is not much of any development given to these characters since they’re just ducks in the shooting gallery. They all mount up their cameras and tools rather quickly with the end goal being treasure for the greedy and the artifact for the explorers. After a minor scuffle with the cops, they eventually make their way through the cramped arteries of Paris’ deep caverns. There is a kid in a corner of the first tunnel that tells them to turn back. They ignore his warning, proceed forward and look back to discover the kid is gone. Nobody questions this because none of them have seen a horror movie or treasure hunting flick.

Everything seems under control until they go around in a circle and the entrance has vanished. Strange voices can be heard from the darkness. Corpses and candles line certain rooms as if they were being staged for a goth music video. And there are plenty of warning signs including the old cliche etching on the wall stating that all who enter shall perish. None of this seems to phase the group as much which may seem shocking, but what they’re doing isn’t technically legal either so chalk that up to low morality. They keep going forward (or descending?) through the caverns, narrowly avoiding being crushed and squashed by the crumbling ground and ceiling. They drop down into dark holes and crawl over piles of bones blocking short openings.

The scares are pitiful. For a film where 75% of the picture takes place in the underground spook factory, it turns into a real bore. Most of the scares come from either trippy visions with way too obvious computer graphics or screams in the darkness that are straight out of the stock haunted house audio library. And there are the usual ghastly visions of tortured souls tormenting the travelers with the usual “I’m still alive” and “it was all your fault.” Is it even surprising that nobody in the group picks up on falling for these emotional traps after multiple visions? The kills are not that impressive either with the bloody bashing of skulls and falling to one’s death. The only end worth mentioning is how one member of the group ends up submerged in solid stone with only their legs exposed in the floor.

There could have at least been an opportune moment to deliver a better reveal of the Philosopher’s Stone, but it’s by-the-book for treasure hunting movies. The MacGuffin of the film is placed right next to a room of gold. Of course, they realize too late that the gold itself is an obvious trap which unleashes all the otherworldly frights. And just watch in amazement as the movies goes for the good old letting go of the treasure to save your own life. This is a group of characters that have not only never seen a horror movie before, they’ve never even seen an Indiana Jones movie.

For what should be a claustrophobic horror venture turns into a real snooze fest. It pulls just about every trick out of the old scare hat with nothing all that frightening to show off. And at two hours, whatever little fear or suspense that may have been effective grows incredibly tired very quickly. The director even spoils opportune moments for a real jump scare as when a mysterious figure doesn’t attack them from the dark, but stands there until he is fully lit and close enough to kill one of them. As Above, So Below ends up being a rather massive disappointment for its wasted potential that could have propelled it out of the mediocrity of this genre. Next time the director might want to get a few original ideas before jumping into the closed spaces with so few ideas and such ineffective frights.