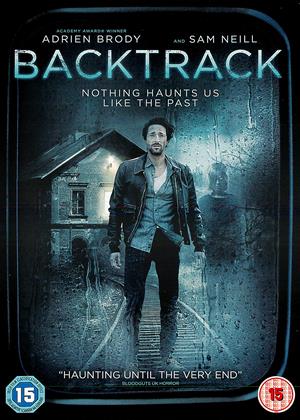 Unwatchable - Backtrack review by AM

Mumbling and no subtitles makes this impossible to watch. We managed about 15 minutes before giving up. No excuse for such lazy film production.

Thanks to the reviewer who highlighted lack of subtitles. Makes me so annoyed that even new films can be released on DVD without them. About 5% of CP films I have to send back without viewing because there is no alert that subtitles are missing :-/

Worth sticking to the end - Backtrack review by DB

Enjoyed this film eventually. Started very, very slowly and was quite dull until about midway through when it became much more interesting. Not the most startling or surprising film we've ever seen, but actually pretty good. Does get better towards the end.

A majestic rainstorm illuminates the city backdrop throughout much of this Australian supernatural horror. A downpour can add so much atmosphere and unease to scenes if handled effectively – and here, Director (and Writer) Michael Petroni uses it very well indeed.

Sam Neill is an actor who has quietly built up a massive body of work. He is always solid, reliable and a powerful presence onscreen. Casually sophisticated and authoritative, he is typically fine here, playing Duncan Stewart, sceptical of the sinister possibilities that are unfolding. Neill’s in good company – Adrien Brody is excellent as tortured Psychologist Peter Bower, who happens upon young Elizabeth, a patient who holds secrets of her own.

This unleashes a whole series of sightings, glimpses, jump scares and apparitions. And yet the overall effect is more of a slowly unfolding mystery than a ‘straightforward’ horror (if there is such a thing), elevated by the performances from the universally excellent cast and rich production values. The film doesn’t quite live up to the moody success of its early scenes, but it keeps things simmering nicely.

The finale and climax either work or they don’t, depending on your point of view. After such a carefully built-up – and occasionally ponderous – storyline, the last moments step up a couple of gears to provide what I thought was a pretty satisfying endgame, even if the ‘twist’ at the end is fairly routine.