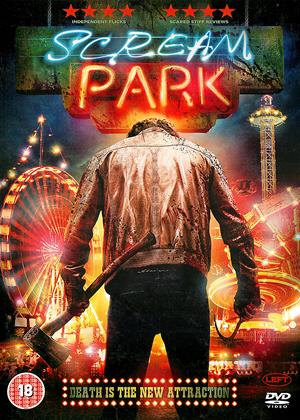 This is a low budget horror. It briefly features Doug Bradley as park owner Mr Hyde (Bradley worked for only one day on the film). ‘Fright Land’ is closing down, going bankrupt, and there is an eccentric plan to attract more customers.

There are some nice directorial moments here – the best being the dead body of a young blond girl tied to a functioning night-time merry-go-round. There’s a definite tension in the climactic scenes and a nicely ludicrous twist to make you groan.

I would never suggest you need to be familiar with the production background to appreciate any finished project, but there is no point criticising this for not have a multi-million dollar budget; it is what it is. Director/writer Cary Hill has financed this through the Kickstarter project, and results are occasionally dull, often interesting. Aside from the impressive Bradley, the cast turn in fair performances. My problem is, this tries to be a kind of horror film I have little enthusiasm for. A teen slasher flick often leads me to side with the villain – not so much the case here, although the characters do not always go out of their way to be likeable.

Pleasingly, there is no compunction to take things too seriously, and that is ‘Scream Park’s biggest asset. As the credits tell us, ‘No teens were harmed during the filming of this motion picture’.