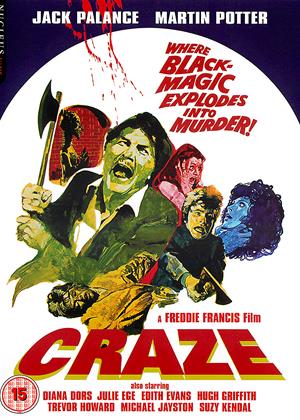 Synopsis:
Freddie Francis apparently didn't care much for this, his 1974 assignment for the Kandel and Cohen production house even going so far as to describe it as "worse than Trog" We at Nucleus, however, disagree: Craze is a slice of prime British horror sleaze, ripe for rediscovery.
It's got everything! It's got Jack Palance pretending to be English, exclaiming Jeezus Christ Almighty! and picking up dolly birds in funky psychedelic nightspots! It's got Martin Potter as his paranoid, hard-drinking gay business partner, Julie Ege and Kathleen Byron as ritual victims, and Michael Jayston, Percy Herbert and David Warbeck as a trio of grumpy flatfoot coppers! It's got Suzy Kendall as a curly-wigged hooker with a jaw-dropping sex-aid collection, and Trevor Howard, Diana Dors, Hugh Griffith and Edith Evans, slumming it in late-career cameos! Not convinced? How about an homage to Peeping Tom (though we're not telling you where, so you have to buy it) an occult coven in purple robes chanting "armuneminuum" and a series of ghastly, grisly, gory, gruesome deaths? Or, best of all, how about Chuko, the ugliest, most googly-eyed fetish idol ever seen on-screen?
Actors:
Jack Palance, Diana Dors, Julie Ege, Edith Evans, Hugh Griffith, Trevor Howard, Michael Jayston, Suzy Kendall, Martin Potter, Percy Herbert, David Warbeck, Kathleen Byron, Marianne Stone, Dean Harris, Venicia Day, Anthony Chinn, Kristopher Kum, Brian McDermott, Quentin Pierre, Guy Standeven
Directors:
Freddie Francis
Producers:
Herman Cohen
Writers:
Herman Cohen, Aben Kandel, Henry Seymour
Aka:
Demon Master / The Infernal Idol
Studio:
Nucleus Films
Genres:
British Films, Classics, Horror
Countries:
UK

Sign up
Wild Gals of the Naked West / Black Snake

Observant readers may have noticed that the breathless description riddled! with! exclamation! marks! of this film and how great it is on the General Info page was copypasted from the website of the company that manufactures the DVD, and would therefore quite like you to buy it even if it isn't very good, in the same way that this rental company labels it a "horror classic" because if they used a more accurate term fewer people would rent it. In fact, they near-as-dammit admit that it's a terrible movie, and they do quote the extremely negative opinion of it held by Freddie Francis. But what did he know? He was only the director.

This being the case, it should come as no surprise when I tell you that this is a very, very bad movie indeed. What saving graces it has are entirely thanks to its extraordinary cast, made possible by the dire state of the British film industry in 1974 (alas, we're still waiting for it to fully recover), which meant that a lot of actors who wouldn't normally have been seen dead in dreck like this were desperate for work and surprisingly affordable. If you've got nothing better to do, try googling the entire cast. You'll be amazed at how distinguished the careers of quite a few of them were, even those way down the cast-list. And of course, some of those veteran troupers knew full well what kind of movie they were in and didn't try to hide it. Hugh Griffith in particular, in the tiny part of the lawyer reading the dead aunt's will, gives a truly mind-boggling performance explicable only if somebody bet him a tidy sum that he couldn't make Jack Palance giggle on camera.

And then there's Jack Palance. Never the most restrained of actors, his portrayal of a rampantly heterosexual pot-smoking antique dealer who is secretly a barking mad gay satanist serial killer is subtle in the same way that this film is a classic. The insistence of the weirdly vindictive cop on the case that this bloke is the killer despite there being no evidence against him, which is probably meant to come across as a piece of brilliantly intuitive detective work, just seems like common sense when the way Palance plays him, this guy might as well have "I MURDER WOMEN FOR SATAN" tattooed on his forehead.

What stops it from being one of the mighty milestones of schlock cinema is that the truly excessive moments are in very short supply. It's the kind of film where if you've seen the trailer, you've already seen all the gore and most of the nudity. Chuko (or Chuku - the cast don't seem very sure how to pronounce it) the diabolical African idol is a memorable visual image, but he's also an inanimate object, despite Freddie Francis' attempts to make him seem a bit more lively through liberal use of the epileptic zoom lens technique so beloved of Jess Franco. And the midsection where Palance sets up a fiendishly cunning alibi for the murder he's about to commit, though actually quite good, is padding stretched as far as it can possibly go because it's cheaper to film than satanic orgies. As for that coven of devil worshippers, they're barely in the film, and serve no purpose other than providing some gratuitous nudity to spice up the trailer. They don't even know about the murders their leader is committing in the name of their ugly little wooden god!

In the end, though it does feature some hilariously bizarre performances, this is basically a very modest thriller with some extra murders and sleaze tacked on so that they can sell it as a horror movie, which throws the plot so completely out of whack that it's full of loose ends. I was particularly baffled by the main character's bisexuality, which the film keeps reminding us of as if it's really important but which has absolutely nothing to do with anything. Perhaps the scriptwriter was so homophobic that he thought worshipping satan, murdering women, and being gay were self-evidently all aspects of the same ghastly perversion?