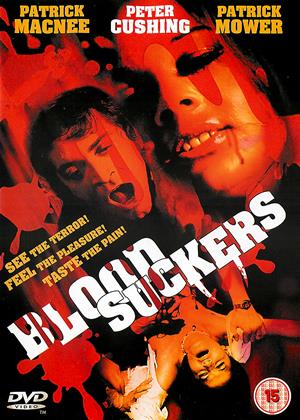 Synopsis:
Whilst on vacation in Greece, Richard Fountain (Patrick Mower), an Oxford don and the Foreign Secretary's son, falls into the evil clutches of Chriseis (Imogen Hassall), leader of a coven of perverted socialites who number innocent victims in pursuit of their blood. Richard's long absence from Oxford prompts his close friends Tony Seymour, fiancee Penelope and Bob Kirby to instigate a search for him. The clues they find take them across the Aegan Sea to Hydra, a small island where the two men find Richard drugged and unconscious in an old castle. A Pagan orgy is building to a climax as Chriseis is preparing herself for her next victim...
After a horrific struggle Chriseis flees, her mouth dropping with blood, and in a tussle with Kirby falls to her death. Richard is saved and returns to the sheltered life at Oxford, but the nightmare is just beginning... the spirit of Chriseis is not yet dead!
Actors:
Patrick MacNee, Peter Cushing, Alexander Davion, Johnny Sekka, Madeleine Hinde, Edward Woodward, William Mervyn, Patrick Mower, David Lodge, Imogen Hassall, John Barron, Valerie Van Ost, Theo Moreos, Nick Pandelides, Andreas Potamitis
Directors:
Robert Hartford-Davis
Producers:
Graham Harris
Writers:
Julian More, Simon Raven
Studio:
Prism Leisure Corporation
Genres:
British Films, Classics, Horror
Countries:
UK

Minutes into this film, we are bombarded with information, some star names and some sumptuous foreign filming. It’s a project desperate to hit us from the very beginning. Only when things calm down a little do we get know any of the characters – played by an impressive array: Peter Cushing, William Mervyn, Edward Woodward and Patrick MacNee. Of them all, MacNee gets the most to do, but even he is killed off well before the final curtain.

Patrick Mower (currently hamming it up in missable Brit-soap Emmerdale) is extremely good as Richard Fountain, who has gone missing in Greece. This allows us some expansive foreign locales, but sadly, this film lacks the ability to deliver a straight-forward, comprehensible film. Whilst the idea of Fountain having been attacked by a Grecian vampire in this sunny, most un-vampiric paradise is an appealing one, so little time is given over to any kind of character development that we don’t really care about Fountain’s plight – or indeed have time even to notice the girl is a vampire until the brief act is carried out and she is despatched. Things become interesting when Mower’s character behaves more and more erratically, climactically speaking out in a rousing rejection of the well-to-do scholars that would see him sensibly married off and educated. That only vampirism can free him from the shackles of his peers is also an interesting idea, but has no time to breathe before Fountain his unspectacularly killed.

This was a troubled shoot, apparently. Director Robert Hartford-Davis found the budget ran out before the film was finished and he removed himself and his name from the project. I was very much reminded of the work of Director Peter Walker (Schizo, Die Screaming Marianne etc) such is the mishmash of pleasing directorial flourishes and messy narrative, but at least at 89 minutes, the project isn’t allowed to meander too much. A horror film filmed in a determinedly un-horrific way, a few more chills – or indeed any at all – would have helped balance the tone out a little.