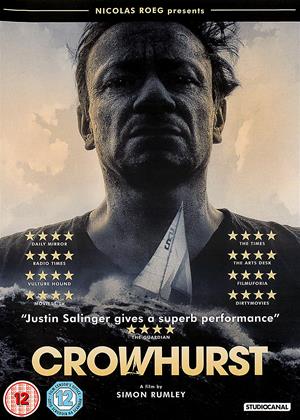 Synopsis:
In October 1968, Donald Crowhurst (Justin Salinger), a 35-year-old engineer and father of four, embarked on one of the last great adventures of the 20th Century. He was one of nine men who set out from the English coast that autumn as part of the Sunday Times Golden Globe Race, chasing to be either the first or the fastest man to circumnavigate the globe single-handed and non-stop. But for Donald the dream turned into a nightmare. Tragic, heartbreaking and enthralling, 'Crowhurst' is a stunning biopic portrayal of a brave man who was too proud to fail and too much alone to live.
Actors:
Justin Salinger, Amy Loughton, Haydn May, Marcus May, Austin May, Agatha Cameron Kettle, Simon Armstrong, Chris Ayles, Eric Colvin, Christopher Davies, Glyn Dilley, Edwin Flay, Christopher Hale, Michael Harkin, Adrian Harris, Hugh Hayes, Nicky Jordan, Richard Lee, Lewis Nicolas, Gavin Nolan
Directors:
Simon Rumley
Producers:
Michael Riley
Writers:
Andy Briggs, Simon Rumley
Studio:
StudioCanal
Genres:
British Films, Drama, Sports & Sport Films
Countries:
UK

I enjoyed this. It was filmed BEFORE the movie THE MERCY, the slick higher budget version of the same story which was released in cinemas first because the same company owned distribution rights to both! Why film-makers do this I have no idea, Just like ANTZ and A BUG'S LIFE out at the same time. Maybe they just lack creativity and copy each other?

Anyway, this is a low budget British film which uses some avant-garde techniques to good effect.

I enjoyed THE MERCY too but that is a slicker high budget effort really - this film feels more real, somehow. It was filmed in the actual house where the Crowhurt family lived too. I liked the portrayal of bankers here - who will always lend you money so long as you have loads of it!

A tragic and maybe even scary movie about obsession and ambition.