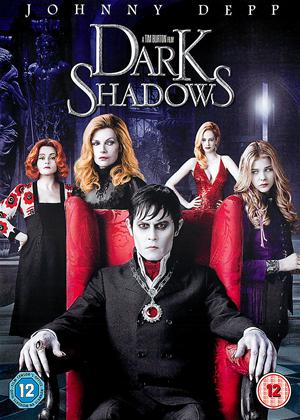 Based on the cult TV series of the same name Tim Burton’s Dark Shadows tells the story of Barnabas Collins (Johnny Depp), a most unfortunate businessman in 1752, whose true love (Bella Heathcote) is thrown off a cliff by the witch Angelique (Eva Green) who wants him all for herself. After disposing of her rival, the previously rejected Angie, curses Barnabas, turning him into a vampire and locking him in a chained coffin underground for all eternity.

Until some clever clogs comes along a little over 200 years later and digs him up.

Things take a turn for the (even more) bizarre when Barney meets the family’s new nanny Victoria, who is scarily reminiscent of his murdered love, Josette (probably because they’re played by the same woman…)

Throw in an appearance from Helena Bonham Carter and a healthy dose of the visual fantastique and you have what seems to be any Tim Burton film made in the last ten years. Not to say the movie wasn’t enjoyable, for what it is it was fine, interesting and fun but the once imaginative and unusual stories and settings Burton was so renowned for have become rather unimpressive and over indulgent of late.