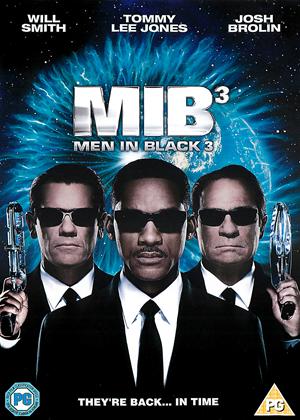 Synopsis:
Agents J (Will Smith) and K (Tommy Lee Jones) are back...in time. J has seen some inexplicable things in his 15 years with the Men in Black, but nothing, not even aliens, perplexes him as much as his wry, reticent partner. But when K's life and the fate of the planet are put at stake, Agent J will have to travel back in time to put things right. J discovers that there are secrets to the universe that K never told him - secrets that will reveal themselves as he teams up with the young Agent K (Josh Brolin) to save his partner, the agency and the future of humankind.
Actors:
Will Smith, Tommy Lee Jones, Josh Brolin, Jemaine Clement, Emma Thompson, Michael Stuhlbarg, Mike Colter, Nicole Scherzinger, Michael Chernus, Alice Eve, David Rasche, Keone Young, Bill Hader, Cayen Martin, Clarke Thorell, Adam Mucci, Tom McComas, Douglas Crosby, Woodie King Jr., Jack O'Connell
Directors:
Barry Sonnenfeld
Producers:
Laurie MacDonald, Walter F. Parkes
Voiced By:
Brad Abrell, Tim Blaney, Thom Fountain, Carl J. Johnson, Angela Dee
Writers:
Etan Cohen, Lowell Cunningham
Aka:
Men in Black III
Studio:
Sony
Genres:
Comedy, Sci-Fi & Fantasy

Reviews of Men in Black 3

Fifteen years after the release of the original Men in Black movie Barry Sonnenfeld returns to the helm of the newest addition to the secret alien agency trilogy, imaginatively named Men in Black III.

Along with Sonnenfeld Will Smith and Tommy Lee Jones return as the main character’s Agent’s J (Smith) and K (Jones); this time however, it’s not just Earth that’s under threat but a devious alien who, having escaped the secret prison on the moon, travels back in time intending to murder the young Agent K and thwart the MiB’s mission in it’s earliest days.

Young Agent K is played brilliantly by Josh Brolin, who manages to imitate and emulate Jones’ mannerisms and Southern drawl almost to perfection; expertly balancing his performance between that of an accomplished actor and a comic character. Whilst Smith’s performance is as enigmatic and loveable as ever and harks pleasantly back to the less serious roles of his past without seeming too cheesy or lacking in charm. I was in fact quite touched by the levels of emotional intercourse offered throughout the movie which I felt were, unlike many films for kids, portrayed in a rather honest and un-patronizing fashion.

Other additions to the cast, including the mysterious Agent O, played by Emma Thompson and Alice Eve (as Young Agent O in 1969) and the surprisingly unpleasant Boris “The Animal” (Flight of the Conchord’s Jemaine Clement) give the third instalment of what on the surface is little more than a rehash of a 90’s children’s blockbuster, surprisingly emanative twist.

The special effects are, of course, spectacular, and absolutely everywhere in the movie, even viewing the movie in 2D you find you can hardly movie for CGI explosions and out of this world monsters. Although this aspect of the movie may have been a little over indulgent, it doesn’t distract from the narrative too much and quite quickly becomes background noise to the charisma of the characters and story.