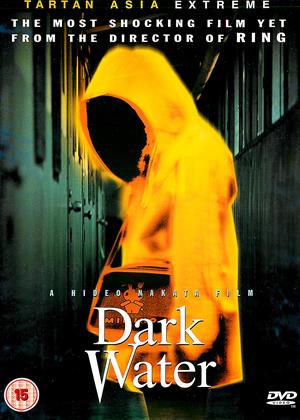 Yes its in Japanese - Dark Water review by CP Customer

but don't let that put you off from experiencing one of the best J-Horror films of late and one that will certainly live on in your memory.

The first two thirds of the film lay down the plot with a recently divorced mother and her daughter trying to establish their own life, while going through the usual battle for custody. Their basic apartment block holds a secret that goes beyond merely a leaky roof. Japan may seem exotic to us, but the daily slog is very much like it is in the UK.

The bleak urban landscape, lack of vibrant life and atmosphere is conveyed extremely well. Beneath the battle between the parents is the quest to know what is the source of the water from above. It is well worth sticking with this roller coaster as it reaches a dramatic climax. One that will have you going back just to check it out again.

Directed by the acclaimed Hideo Nakata, this Japanese horror was part of a number of films featuring ghostly black-haired children that courted a wave of popularity (and American remakes) alongside The Ring, the Eye and The Grudge.

Recently divorced Yoshimi Matsubara (Hitomi Kuroki) and her young daughter Ikuko (Rio Kanno) move into a rundown apartment block where there is an alarming – and growing – patch of damp dripping from the ceiling. Ikuko attends the local school and adapts quickly, but sees ghostly images of a dark haired youngster. This little spirit is often accompanied by puddles of water that seem to be reaching out towards Ikuko, like fingers. Could this be the local child that has recently gone missing, leaving only her red school satchel behind – a satchel that crops up in the most unlikely places?

SPOILER: it emerges that the missing Mitsuko Kawai (Mirei Oguchi) drowned in a large water tank on the apartments’ roofing whilst trying to retrieve her satchel. Now a ghost, she now sees Yoshimi as a kind of mother figure, and haunts her and her daughter, leading Yoshimi to make the ultimate sacrifice and appears to travel over to the ‘the other side’ to appease the spirit and save her daughter. This scene is illustrated as Yoshimi elects to stay in the elevator frequented by Mitsuko’s spirit. When at last the sliding doors open before her, a vast outpouring of water envelops Ikuko. Of her mother, there is no sign – until ten years later when she revisits the apartments, dilapidated outside, but tidied and fresh inside. She sees her dead mother who assures her that as long as she is well, she is happy. Mitsuko is also there, but when Ikuko turns, she is gone.

This is a good, creepy film that also carries a real emotional sting. Although Mitsuko has a history of instability, there is little doubt that the watery hauntings are real, and these are achieved very convincingly – none more so than when Mitsuko enters her flat once again after the damp patch on the roof has grown once more, to find filthy water pouring from the ceiling in every room. The effect is very much as if it is raining on the inside and is highly unsettling.

The melancholy of the lonely little girl, now without a mother, is also palpable but at least we get (and she gets) some assurance that Mitsuko will always be watching over her.

I'd read the blurb and the comments and knew that I was in for an hour and a half of scariness, and it certainly was pretty frightful at times, especially when the shrill music shrieked at moments of a pretty fearsome film.

The setting of the film is pretty gruesome, to say the least, and I couldn't really understand why the poor woman didn't leave the awful flat straight away, but then we wouldn't have had the film would we. Anyway, certainly a very scary film.

This has the look of millennial Asian horror (from the director of Ring), but it also offers a huge emotional impact. It is a clever visual allegory of a dead child's supernatural plea for her grave to be found. A brilliant, unsettling ghost story which mirrors back our own existential fears; which is what great horror always does.

forgot it had subtitles so the film was stupid what i seen of it,

0 out of 7 members found this review helpful.
Show more