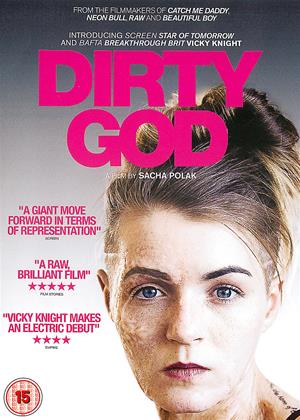 This first English-language feature from Dutch director Sacha Polak boasts a stand-out performance from Vicky Knight, who gives an unflinching portrait of a strong-willed yet immature and not very likeable protagonist facing a radical change in how the world looks at her, as well as how she sees herself, after an acid attack.

Polak sets the tone immediately with unsettling widescreen close-ups of acid-damaged flesh, the camera capturing the mass of ravaged, puckered tissue covered in shallow ridges. Although Knight was herself scarred from a burning accident, the makeup department apparently enhanced the disfigurement for her character Jade, thus ensuring that viewers confront the discomfort of watching a woman whose blonde good looks would conform to Western notions of beauty were it not for the scarring on large portions of her face and upper body.

We first see Jade the day she’s discharged from the hospital, and the film spends considerable time examining Jade's relationships. Firstly, there's her mother, Lisa (Katherine Kelly), a volatile woman with a black-market business selling stolen goods; then some particularly painful scenes involving her two-year-old daughter, Rae, who turns hysterical on seeing her mother’s damaged face encased in a temporary protective clear mask. Of particular significance is the relationship with her best friend, Shami (Rebecca Stone), whose unfazed ebullience seems to be just what Jade needs, but, as a night out with her old mates proves, re-integrating into her life is going to be a challenge she’s ill-equipped to handle, and that with Shami’s boyfriend, Naz (Bluey Robinson), who continues to play on the sexual tension that existed between him and Jade before the attack.

Jade’s now starved for the attention she once took for granted, resorting to video-camming on chat sites while keeping the camera off her face. It’s a release of some sort but also becomes an avenue for humiliation, further reminding her that with the loss of her looks came a loss of empowerment. The doctors tell her there’s little more they can do cosmetically, and, lured by by idea of plastic surgery, gets a job at a telemarketing company to pay for it, facing down the stares and taunts of colleagues (whose hostility is perhaps a little overdone - a rare wrong note).

As in her previous films, Polak includes moments of striking dark humour, such as a scene in which Jade dons a niqab and swirls across her apartment building’s balcony, finding confidence in her ability to hide while spectacularly displaying herself at the same time, whilst two brief nightmare scenes in which her attacker appears in a collar of black cock feathers, hovering by her face, are intriguingly ambiguous but don't quite come off.

While the script’s attempt at transforming the character from victim to resolute survivor doesn’t entirely succeed, this is on the whole a brave and powerful piece.

I am not sure what I expected but found it difficult to equate with the grubby lives of these individuals. The acting was good but I didn’t really like the storyline

Its ok but slow moving - Dirty God review by SW

The premise to Dirty God is ok but the film never really goes anywhere and is one paced. The performances are good but its all rather slow.