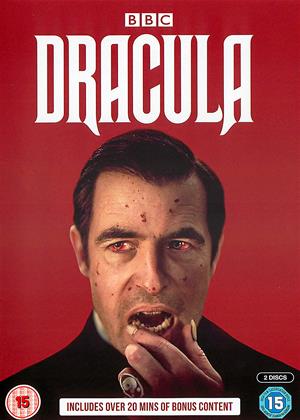 There are many ways that producer Stephen Moffat could take the horror icon of Dracula. One could focus more on the plight of the villain in trying to come to terms with his immortality. You could even focus more on the perspective of his victims, struggling to make sense of the monster. It’s unfortunate to report that Moffat’s monster miniseries arrives about as sloppy as expected, meandering around so many interesting aspects and never making any of them pay off.

This is exceptionally depressing given the somewhat strong start of the first episode. We’re given the intro on Dracula by a deformed Jonathan Harker (John Heffernan), clearly having somehow escaped the grasp of the monster. He relays the familiar story of himself coming to meet with Count Dracula, played at first by an aged Claes Bang in makeup and then a more lively sexier version. The story proceeds somewhat expectedly of Dracula slowly revealing his vampire nature with his hypnotic women, aversion to mirrors and thirst for blood.

But there’s a massive tease with this story. Before Harker divulges, the nuns helping him at their convent mention the possibility of Harker having sexual relations with Dracula. But don’t get too excited. There will be some affectionate looks and actions that could be read through queer theory but that’s about it. Any hopes of touching on Dracula’s sexuality or diverting from heterosexuality is all but squashed when the ultimate reveal of this entire series is that Dracula just wants to settle down into death with a nice woman. It’s about as weird and disappointing as it sounds.

The entire series goes about itself with constant subversion, akin to Moffat’s run on Doctor Who, stirring up a story that he’s not quite sure where it’s headed or if it’ll even say anything in the end. The first episode features Dracula being discovered by the likes of Sister Agatha Van Helsing (Dolly Wells), trying to decipher how such a monster could come into being. By the end of the episode, there’s some effective body horror but mostly a horrifying conclusion that Dracula is more intelligent and ruthless for a gaggle of nuns to best. The second episode is a murder mystery on a boat where we know that Dracula is the murderer and merely watch him cavort amid the chaos of accusations and playing on fears, making the 90-minute runtime feel excruciating. The third and final episode places Dracula in modern times and it’s about as tedious and uninspired as the likes of Dracula 2000. Twenty years later and we still haven’t found anything unique to do with the character.

The show pretty much falls into a predictable formula of a monster saga. Dracula entices some unfortunate soul, tortures them, takes their blood, rinse and repeat. Even worse, we see all this from Dracula’s perspective and most of it seems to be out of either boredom or trying to amp up his skills. It’s revealed that anyone Dracula consumes means he attains their knowledge as well. So if he wants to learn French, he merely guzzles the innards of a French girl. This could make for a fascinating character that acquires many skills throughout the ages and becomes bound by aimless ambition for succeeding in the world. Ah but such ambition is not bound for the likes of this Dracula, more content to manipulate and stew in the shadows with his many victims.

Dracula is a series that throws so much at the screen and never comes off as compelling. The second episode began with Dracula and Agatha speaking friendly and we’re meant to be thrown off as to how the two ended up at this point, only to reveal that Agatha was hypnotized which isn’t as big a twist as the writing seems to suggest, unless you just happened to miss the first episode. The third episode rewrites so many rules and motivations for Dracula that the ending is a hokey mess of pitying the insincere monster because he just wanted some woman to join him in his descent into hell. Uh-huh. I suppose if you can get away with writing that Dracula doesn’t have a real aversion to sunlight you can write any dopey ending you want. Such is the expected tediousness of Moffat’s structure, bound by twists for the sake of twists with build-up and character motivations be damned.