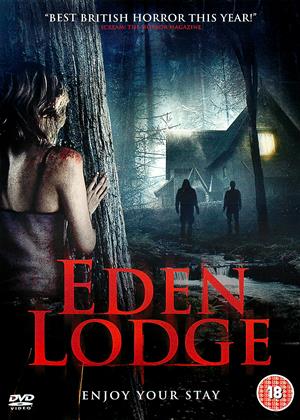 Synopsis:
A young married couple, along with their new born baby, retreat to the idyllic English countryside in an attempt to repair their fractured relationship. However things rapidly take a turn for the worse when their car breaks down and they are forced to spend the night at a remote bed and breakfast known as Eden Lodge. At first the place looks and feels like paradise, but their peaceful weekend quickly turns to terror when they realise that the people they meet are being killed one by one. Rachel and Adam must fight to protect not only their failing marriage, but also their lives.
Actors:
Georgina Blackledge, Aggy Kukawka, Ivy Corbin, Cyd Casados, Ben Gardner Gray, Garry Mannion, Ellie Dickens, Jake Unsworth, James Killeen, Andrew McDonald, Georgio Costa Houtris
Directors:
Andreas Prodromou
Producers:
John Kyriacou, Andreas Prodromou
Writers:
Andreas Prodromou
Studio:
Signature Entertainment
Genres:
British Films, Horror, Thrillers
Countries:
UK

Adam Michaels (Ben Gardner Grey) and his determined-to-be-miserable wife Rachel (Cyd Casados), along with baby Alfie (Georgio Costa Houtris) stay the night at Eden Lodge, unaware of the slate of carnage that erupts around the place. A rambler is killed, her friend is imprisoned and tortured – and shortly after this everyone the couple meet are either dismembered or killed. The only two other survivors appear to be lovely landlady Mrs Wilkes (Ellie Dickens) and her reserved son David (James Killeen).

From the offset, Wilkes is represented as deeply religious, which appears to earmark her for suspicion. David is an awkward, ungainly fellow, and so he, too, should be considered a suspect.

Although highly likely to be red herrings, it materialises toward the end that they must be guilty, because everyone else has been killed. Except there is a twist – David committed suicide ten years ago, and his mother is the only one who sees him.

Rachel discovers the real David is a long-dead cadaver safely tucked up in clean sheets, in the top bedroom of Eden Lodge.

As is often the way with these things, there are plot questions. It is ten years since David’s death – are we to suppose that his mother has only now decided to carry out her twisted revenge – and if so, why the wait? If not, and she has been making these seemingly arbitrary killings, what has happened to the various corpses - at least five people die within the few days in which ‘Eden Lodge’s’ events take place, so by that reckoning, a large amount of corpses would have built up?

Presented as a slightly more-grisly-than-usual television horror drama, some of the acting is occasionally stilted. What gore there is, is effectively conveyed and, although it never intends to stray too far from standard horror, this is nevertheless a competent and enjoyable film. One online reviewer has compared it favourably to the films of Pete Walker, with Mrs Wilkes being an ideal part for Sheila Keith. It hadn’t occurred to me, but it’s a convincing point of view.