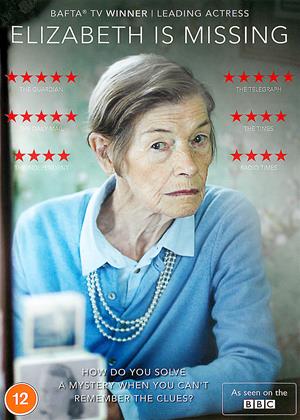 Reviews (2) of Elizabeth is Missing

This piece stars Glenda Jackson who gives a strong performance in depicting the inner life of the protagonist Maud, whose mind is being slowly devastated by dementia.

Adapted from the novel by Emma Healey in which Maud is the unreliable narrator, the heart of the plot is Maud's concern about her elderly friend, Elizabeth, who has failed to turn up at their regular meeting place, and worries she might have come to harm. But no one else seems bothered, least of all Maud’s daughter, Helen, who has enough on her plate just keeping tabs on her mother, and Elizabeth’s son, who unsurprisingly doesn’t welcome being harangued on the phone at three in the morning. In a bid to organise the chaos of her mind, Maud is forever writing messages to herself. Thus, post-it notes line her walls and pockets, through which she can make sense of the world and, it is hoped, unravel the mystery of her missing friend. “I haven’t lost my marbles though everybody seems to think I have. Nobody listens to me,” Maud grumbles to her granddaughter. Rarely off the screen, Jackson is remarkable, playing Maud not as a benign and crinkly grandma but a proud woman unmoored and rendered increasingly impatient and volatile. Sitting in a restaurant with her family, she smashes a plate and emits a silent scream, her face and body contorting with frustration, whilst later, we watch her claw at the front door, as Helen, fearing she might go wandering, locks her in her house overnight - the film is good at showing us how dementia eats away not just at memory but identity and empathy. The pain of these losses are sharply drawn here, both in Maud and her family who mourn the mother and grandmother they once knew, and the film is all the better for being totally unsentimental and (generally) free of melodrama.

Unfortunately, all this is rather undermined by a much weaker parallel narrative set in the late 1940s, in which we meet young Maud along with her glamorous older sister, Sukey. I realise the background story is there so we can build and feel a connection with Maud as a real person and that Maud's sisters disappearance played a part in Maud's later life, but for me there's way too much about Sukey, who I couldn't care less about, and the tv soap-style suburban murder mystery element (which includes a truly ridiculous 'big reveal' near the end) for me is a big, and unnecessary, distraction from the generally powerful central theme. This got me thinking why the author/director felt it necessary to include such a 'heavy' sub-plot - is the present-day material not 'entertaining' enough? Or is it that they think the audience can't bear to watch it for a sustained period? Either way, it rather defeats what I presume the main the object is - namely, to show the variety of sorrows dementia causes, and to empathise with someone suffering from it.

It is a very well acted film by the lead character and the past events are revealed in the final 15-20 minutes of the film. Until then, the film does feel like a long reflection on the dementia problem. It was a bit depressing to watch at times.