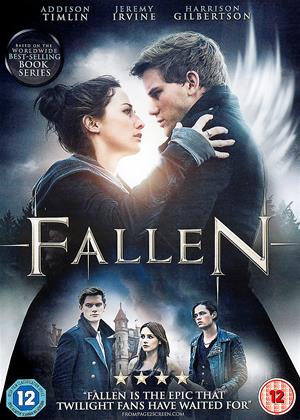 Wow, was this film late to the party. Perhaps if it had arrived at the height of Twilight fever, Fallen may have had a shot at garnering and even salvaging an audience seeking angsty teen romance with a supernatural involved. It’s impossible to look away from its love triangle centerpiece as little more than trying to ape off Twilight in a sleazy Asylum studio method of seeking marquee value. Had there not already been a slew of these very films prior, maybe, possibly, there would be some appeal. But, honestly, even if we completely divorce ourselves from the Twilight appeal and treat the movie on its own merits, it just doesn’t work.

The film centers on Lucinda Price, a girl sent to a reform academy after she apparently killed someone. There, she meets two boys, Cam and Daniel, and she’s attracted to them both. Of course, the big appeal is that they’re both mysterious and thus becomes a curious puzzle for Lucinda to solve. However, the deeper she dives, the quicker she discovers that the boys are fallen angels that have a history which has preceded them coming to the school.

And, honestly, do we need to go on? It’s essentially a Bible version of Twilight, as though some youth-targeting Christians gassed up their gospel train to hitch onto the Stephenie Meyer bandwagon. This tying into Christianity isn’t just a subtle insertion of angels, but taken quite literally as though the script were either written by a Christian teen penning angsty young adult fiction or an aged executive pretending to be hip with Christian teen tantalization. How bad is it? Lucinda is literally referred to as Lucifer in the film.

The mystery of discovering that these characters have been reincarnated holds little appeal considering they don’t have much going on in there lives. That may not seem so with Lucinda seemingly having a murder on her hands, but that is a mystery as well that builds with the same staggering amount of boredom. The sexual tension is fairly weak which is not unexpected with such bland characters who speak constantly more about who they were before than who they are now, as though they’re elders looking back on another lifetime. Yes, I’m aware it was literally another lifetime for these characters, but, wow, their current timeline is a real drag. This is further frustrated by lackluster fight scenes.

Up to the climax, I thought I might be going too hard on Fallen. It’s not exactly hitting any beats for me but maybe for a younger crowd it’ll have that cheesy allure. Then I arrived at the ending which stresses the idea of baptism and the afterlife with a very mixed message. If read the wrong way, some unwitting teen is going to believe getting baptized makes you immortal, free to pursue a lifetime a heated love triangles and endless mystery solving. What a life that would be. Sadly, we don’t live in that world. We live in a world where Twilight run-off like Fallen takes a bit longer to fall off the drainpipe.