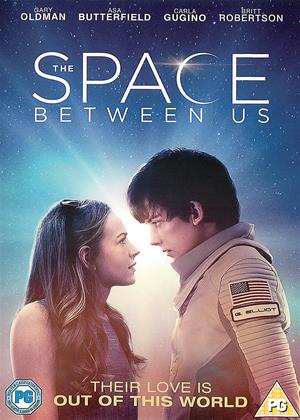 Synopsis:
In this interplanetary adventure, a space shuttle embarks on the first mission to colonize Mars, only to discover after takeoff that one of the astronauts is pregnant. Shortly after landing, she dies from complications while giving birth to the first human born on the red planet - never revealing who the father is. Thus begins the extraordinary life of Gardner Elliot - an inquisitive, highly intelligent boy who reaches the age of 16 having only met 14 people in his very unconventional upbringing. While searching for clues about his father, and the home planet he's never known, Gardner begins an online friendship with a street smart girl in Colorado named Tulsa.
When he finally gets a chance to go to Earth, he's eager to experience all of the wonders he could only read about on Mars - from the most simple to the extraordinary. But once his explorations begin, scientists discover that Gardner's organs can't withstand Earth's atmosphere. Eager to find his father, Gardner escapes the team of scientists and joins with Tulsa on a race against time to unravel the mysteries of how he came to be, and where he belongs in the universe.
Actors:
Gary Oldman, Asa Butterfield, Carla Gugino, Janet Montgomery, Trey Tucker, Scott Takeda, Adande 'Swoozie' Thorne, Sarah Minnich, Ryan Jason Cook, BD Wong, Lauren Myers, Morse Bicknell, Beth Bailey, William Sterchi, Anthony Jarvis, Britt Robertson, Zacciah Hanson, Jesse Romero, Tim Janis, Kristen Rakes
Directors:
Peter Chelsom
Producers:
Richard Barton Lewis
Voiced By:
Peter Chelsom
Writers:
Allan Loeb, Stewart Schill, Richard Barton Lewis
Studio:
Entertainment In Video
Genres:
Action & Adventure, Drama, Romance, Sci-Fi & Fantasy

Reviews (2) of The Space Between Us

It isn't that bad, really - The Space Between Us review by PR

Hasn't this film been rather too harshly judged by the resident critic? Whereas most of what he says are fair points, the same and far worse could be said of many films churned out by Hollywood , yet which are hailed as "gripping". It is a fantasy love story mixed with comments about not being adapted to one's environment, and as such it has some nice moments. The young man's reactions to Earth are indeed either exaggerated or, worse, under-elaborated , but he has a naïve charm. The weakest link is the personality of the girl, totally unconvincing as a tough orphan "know to Social Services"; she is far too well-groomed and polite (not one swearword, which I normally would applaud, but seems farfetched here). Still, give this film a try, in the knowledge that you are in for a light, inconsequential couple of hours. It really isn't THAT bad. At least it is not pretentious or gratuitously nasty.

Lightweight but fun - The Space Between Us review by RL

I like both Britt and Asa as actors and this is very much a "feel good" movie but it's exceptionally lightweight. There's plot holes all over it and the end is a total let down. If you don't mind films being a bit silly go for it, it'll make you smile.

The Space Between Us review by Mark McPherson - Cinema Paradiso

The Space Between Us has all the melodrama and inconsistencies of a young adult romance written by a first-time young adult writer. It attempts to weave a Boy in the Bubble style drama with an inspired tone of the insipid The Fault in Our Stars. And that would all be fine and forgettable if it weren’t for the desire to add science fiction into the mix. If you want to dabble in genres, you better do your homework if you want your picture to appear just as thoughtful as the romance. And it’s very clear that the writer and director didn’t study up for this project.

Here is a movie in which the most amazing development in space travel has occurred and then rarely built upon for a more intelligent film. An astronaut on a team mission to colonize Mars turns out to be pregnant during her journey and births her child on Mars. She doesn’t survive the birthing, but her son Elliot comes through for the colony to raise. Fearing a PR nightmare, NASA keeps the boy a secret from the Earth public and apparently the rotating NASA scientists that visit the colony. I guess they just pretend he’s not there, even though he works publicly with everyone else.

Elliot is a likable enough character on Mars in how he is a genius boy that has mastered building robots, hacking systems, sneaking around the base and taking rovers out for angry joy rides. He spends his days secretly chatting with Earth-girl Tulsa (Britt Robertson) and agonizing over his mother’s past and the uncertainty of whom on Earth may be his father. NASA finally decides to throw the kid a bone and send him back to Earth with the help of some science to improve his body. But there’s not enough science as his enlarged heart prevents him from living a long life on his father’s home planet.

But when Elliot arrives on Earth, he and the movie suddenly become amnesic and dumb. He becomes a clumsy dolt that needs the slick-talking Tulsa to guide him on his journey to dad. This is a boy that has lived on a space colony all his life, but apparently doesn’t know what an eyewash station is. He’s amazed by the wonderment of water and rain, despite having clearly been seen working with irrigation on Mars. But maybe Mars made him stupid, as apparently his only training for Earth life was a 1950s training film about courtship. Where did this film come from? Why was it the only training he received? Did he even receive any prep from anyone beside himself?

These are all questions the movie refuses to answer and offers up plenty more of this questionable lunacy in its sci-fi excuse for young love. For instance, Elliot apparently has access to the Internet and can hack his way into a chat system with another Earthling. So how are simple things such as burgers and horses not only strange to him, but also frighteningly foreign?

Further screaming the incompetency of this script are the ill-defined characters. Tulsa is supposed to be a smart enough high school kid to fly planes and hot-wire cars, but speaks with the vernacular of a 50-year-old man trying to sound hip. Gary Oldman is fine as the obsessive scientist that wants to help and learn from Elliot, but does little more than run around frantically as he searches for the Martian boy that went missing. And Elliot’s desires and personalities are so scattershot in his exploration of Earth that he’s less of a character and more of a cipher for ignorant innocence.

Forgetting all the jumbled plot elements, the film could have recovered if there was some real chemistry to the romance of Elliot and Tulsa. It’s a little hard to find it cute when Elliot discovers Tulsa’s secret talent of playing the piano when it occurs in a Costco. After being together for one day, they immediately consummate their love in a very awkward scene of teen sex. The only thing more cringe-worthy about this scene is Elliot’s lovey-dovey rambling about how he never knew about water before he came to Earth. YOU WORKED IN IRRIGATION ON MARS!

This is a story so ridiculously presented that it spins itself into the most preposterous of love stories in a world where crop dusters cause Michael Bay levels of explosions and cars are so easily available to steal you needn’t hot-wire them. It’s also tone-deaf in how it bounces between being high-concept science fiction, young adult romance, and indie road trip comedy, failing spectacularly at each one. This picture reeks of last-minute script changes in order to fulfill some youth-targeted quota rather than tell a competent story about a boy born on Mars. It was made on Earth, but is alien in its ideas about science and love.