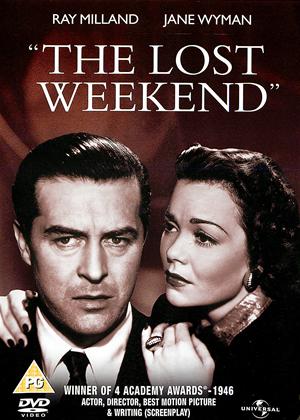 Reviews (3) of The Lost Weekend

Considering it was made in 1945, this is an astonishingly frank portrayal of what it's like to be a hopeless alcoholic, and Ray Milland gives the performance of his life as the utterly wretched central character, right from the opening scene where, with twitchy desperation, he tries to convince his wearily skeptical brother that he really is staying on the wagon this time, a promise the audience knows he isn't even going to try to keep because the very first shot of the movie has shown us his cunningly concealed bottle.

The trouble is, it's very hard indeed to feel any sympathy for the person in whose company we spend almost every minute of the film. He's the reason why it's a terrible idea to go into a bar on your own; somebody like this will inevitably sit next to you and subject you to his "I coulda been a contender" monologue that all the regulars have heard a thousand times, and it will soon become obvious that he never coulda been anything except a pub bore. Our hero's personal tragedy is that his teenage ambition to be a Great Writer didn't work out, self-pity drove him to drink, and now he's got two things to feel sorry for himself about. He's 33 years old, he's been living on his brother's charity since dropping out of university, and he spends his days telling bored bartenders what a Great Writer he'd be if only he could remember all the purple prose booze inspires him to spout when he's sober enough to type.

He's a noisy, tedious drunk who does mean-spirited things and doesn't really seem to care about anyone except himself, and I didn't care whether he sobered up and wrote a Great Novel or staggered in front of a bus and died. I also found it completely implausible that a girl like the one played by Jane Wyman would have stuck with this whining wretch through three years of broken promises (oddly, there's another character in the film who seems far more likely to have put up with such behavior, but is wasted as the setup for a contrived plot point which ends up being all about our sozzled hero). There's some superb acting going on here, and as a pseudo-documentary about substance abuse it pulls very few punches, but my complete lack of empathy with the main character or concern about his fate left me feeling that I was watching a film which was technically great without really getting emotionally involved in it, to the point where, during moments that were supposed to be intensely dramatic, I found myself wondering how come an alcoholic who will sell anything he can get his hands on to buy his next drink lives in such a well-furnished flat.

Agree with the above - The Lost Weekend review by Oli

Just watched this last night, thought it initially sounded like an interesting movie when I was looking through my 1001 movies to watch list, but it is a bit average, it's likeable and it has a few moments, and you can see there's definitely people like this in real life, but he isn't someone you rally behind and you do begin to question how he would get such a nice caring girl and a nice flat etc. some of it doesn't really add up. It was still a decent watch though, maybe the film was made more to see the horrors of being an alcoholic, Jane Wyman was really good and there was some great acting like the above said, just the story doesn't really add up in the end. It's just so hard to believe a person like this could ever have become a great writer, he just seems to lack ambition.

A brilliant, classic movie based on a classic book about alcoholism - The Lost Weekend review by PV

This film dates from 1945 so of course it will have dated - but criticism of that is rather unfair. I am sure the tedious Hollywood tripe of superhero movies like Black Panther will date much worse, and they have zero value.

This and the sublime SOME LIKE IT HOT are director Billy Wilder's masterpieces, and bot movies did badly in preview screenings. These days such negative previews would mean an editor would cut them to shreds; thankfully, back in 1945 directors who stick to their guns! And thank goodness, because THE LOST WEEKEND and SOME LIKE IT HOT and two of the best movies ever made.

THE LOST WEEKEND is based on the classic book which I have read - and so the entire plot makes sense in the light of that. I found myself rooting for the main character to recover and get writing!

Now, I know the #Metoo moaner mob lobby and the pc diversity-worship virtue signallers will get all po-faced and self-righteous about the very male-based story, the passive female characters, the one black character as a toilet assistant in a bar. But this was 73 years ago! And I much prefer a portrayal like this compared to the box-ticking 'politically correct' dramas of now . Maybe this could actually be remade with an all-female drunk cast, like some dipsomaniac Ghostbusters. Now there's a thought LOL.

A serious issue well-handled and imaginatively directed - and the views of New York's Jewish and Irish quarters are fascinating. I wish it looked like that now - I would definitely visit.

Of course, tales of drunken writers are nothing knew and many famous writers have been drunks from Poe to Fitzgerald to Dylan Thomas. And it's hard to portray that without getting boring but Wilder succeeds - my reaction was certainly not to condemn the addict but to pity him. Perhaps these days the drunk would need to be a weepy professional victim woman to gain our sympathy, and that says a lot more about us and our hypocritical society than anything else. It's very easy to condemn. But plenty of stones flying around glass houses, methinks.

Of course, without his rich brother's help he'd be on the street, which is the same from a lot of addicts from wealthier backgrounds.

A good partner film to LEAVING LAS VEGAS a modern version really, or THE MAN WITH THE GOLDEN ARM, or TV series BREAKING BAD or THE WIRE to show addiction through drugs, but alcohol was and is the biggest addiction issue in our society.