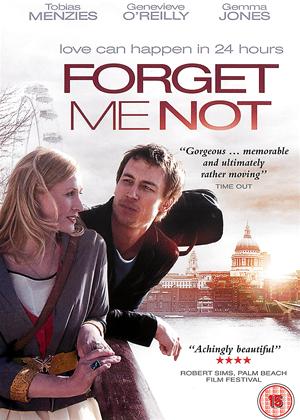 Reviews of Forget Me Not

Forget Me Not review by Alyse Garner - Cinema Paradiso

Forget Me Not is the bittersweet gentle story of the twelve hours after a musician attempts suicide. The film stars Tobias Menzies, who many will know from his various performances on British TV including Spooks and Rome. His co-star and guardian angel, Eve – played by Genevieve O’Rielly – is a barmaid who interrupts Menzies on the brink of his overdose and unknowingly coaxes him out onto the streets of London where he is reminded of the pleasure life can bring.

This is one of those movies where very little actually happens. The couple, Eve and Will, spend from midnight to mid day together getting to know each other: discussing their childhood loves, their parents, and their dreams and in a very gentle way they intimately and verbally explore each other’s deepest thoughts.

The film has a soft and melancholy grace about it, introducing you to the personal troubles of the character’s lives. A ride on the London Eye at dawn leads to Will opening up about the death of his parents, whilst afterward Eve takes Will to meet her Grandmother who is struggling in hospital to come to terms with a diagnosis of Alzheimer’s.

The film doesn’t cut out any of the upsetting stuff, but neither does it attempt to drag the tears out of you. The film knows it is neither a well of sorrow nor a black tragedy; it plays the suicide theme with ease whilst the characters give it a sweet realism you’re unlikely to find elsewhere. It’s a film for fans of those rare and off beat indie movies that filter through from time to time.

By the ending of the film you have your hopes held high for Will’s salvation by his chance encounter with Eve. Yet this satisfaction is taken from you when it revealed that he too has an unusual form of Alzheimer’s and that this was he reason for attempting to end his life. This revelation is somehow intended to explain and excuse Will’s suicidal feelings and yet they diminish the realism the film had spent so long building. It seems like a desperate scrabble by the writers to give Will a raison d’etre that just doesn’t fit with the rest of the film; had they left Will’s motivation open the film would have ended on a far more painful and poignant note, but as it is it’s weak and does the rest of the film an injustice.