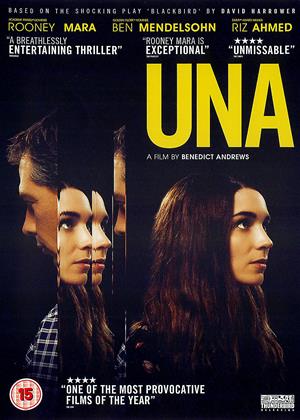 I suspect this would work better as a play in the theatre, which it originally was - Una review by PV

This is a very stagy, very theatrical film - nothing can disguise the fact this started out as a theatre play.

I suppose it was a success because it tapped into the trend of obsessing about child abuse.

It's watchable but nothing very daring or controversial even here - and the dots are joined in a bit of a clunky way, all engineered for us to have sympathy with the female character.

A curiosity really p and I was baffled from the start at why the man seemed to have an Australian accent!

the timeline did not work ,

Waste of an evening,

Wished we’d turned off after 10 mins.

I agree with the other reviewers ... and didn’t like some of the unnecessary sexual language going on ...

While the acting was convincing and the cinematography was impressive, a challenging issue was rendered dull by a presentation which lacked energy and imagination. Had this been a stage performance the numerous long silences would have put the audience to sleep.

Not bad, not great - Una review by Dax Williams

I was not really looking forward to this film after reading the other reviews here, but actually it was better than I thought it would be. I guess it's about expectations. As another person mentioned, it is clearly based on a play, but I thought the flashbacks worked pretty well which is something that always works better in films than in theatre. Mendelsohn and Mara are good actors that give strong enough performances here - RM making a decent fist of a southern English accent too. The script has no award winning emotional speeches of note, but gets the story/atmoshpere across fine and stops short of falling into the cringe territory of many British movies.

Una is by no means a masterpiece and I found the ambient music/noise an unnecessary nuisance - perhaps a bit over-directed (if that's a word) in an attempt to diminish stage-like feel of the piece.

Una deals with a dificult subject matter and the complicated personal issues that arise thereafter, so this isn't a movie for everybody. Riz Ahmed's character didn't really make much sense and was only there as a convenient tool to push the plot along. I would say the film lost it's way a bit in the final 15 minutes, but overall it is a pretty decent watch.