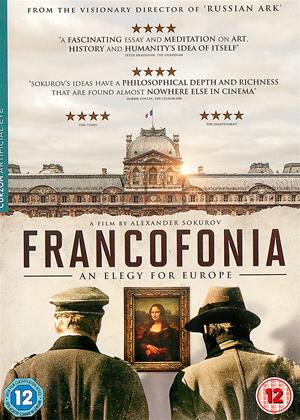 Synopsis:
"Francofonia" is the story of two remarkable men, Louvre director Jacques Jaujard and Nazi Occupation officer Count Franziskus Wolff-Metternich - enemies then collaborators - whose alliance would be the driving force behind the preservation of museum treasures. From the master director of 'Faust' and 'Russian Ark' comes a fascinating exploration of the relationship between art and power, the Louvre Museum as a living example of civilization, and what art tells us about ourselves even in the midst of one of the bloodiest conflicts the world has ever seen.
Actors:
Louis-Do de Lencquesaing, Benjamin Utzerath, Vincent Nemeth, Johanna Korthals Altes, Andrey Chelpanov, Jean-Claude Caër, Catherine Limbert, Adolf Hitler, Eric Moreau, Marika Rökk
Directors:
Aleksandr Sokurov
Producers:
Els Vandevorst
Voiced By:
Aleksandr Sokurov, Francois Smesny, Peter Lontzek
Writers:
Aleksandr Sokurov
Aka:
Le Louvre sous l'Occupation
Studio:
Curzon / Artificial Eye
Genres:
Drama

Superb film recounting the lives of two art lovers, one the Count Meternicht the German Officer during WWII in charge of preserving the art treasures of France and the other Director of the Lourvre. Despite being on different sides, together they worked to ensure that the treasures of the Louvre were protected and that they were NOT transported to Germany as Hitler's high command desired. Great history and great story told with imagination and verve especially the use of two ghosts who inhabit the great museum of France.

Aleksandr Sokurov, the Russian director best known for his monumental feat in which he made a 100 minute-long film by employing only a single shot (the longest one till date), now puts his talents to work toward Francofonia – a highly stylized documentary depicting Louvre during the reign of a certain National-socialist movement, better known as Nazism. In it, Sokurov ventures deep in history with a single mission in mind: to deconstruct the meaning behind art; moreover why humans take the time to chisel rocks and throw various colors at a white surface with a somewhat moot intention. Is there something behind all that fuss?

As opposed to Russian Ark, Francofonia is more subjective an experience, clearly showcasing the director’s innovative cinematographic touches via scenes that encircle the whole Louvre in all its glory, the shiny works of art that individually all tell a different story, and together make a collective structure not only of the themes they explore – but the institution in which they happen to prevail during turbulent WWII times.

No all is masterful however. Sokurov’s aptness to cut things short in the middle of an ongoing scene casts a presumptuous shadow over an otherwise harmoniously edited piece. At times, it may come off as amateurish, but I don’t think Sokurov doesn’t know what he’s doing. Still, it’s worthy of notice since everything else, reminiscing a folklore motif of a lavish jigsaw, falls perfectly in place.

And this goes to say without imploring the critique of capitalism, which Sokurov so happily manipulates.

Whilst unfolding Francofonia’s narrative threads, it becomes clear what the film’s overall message is all about: steering clear off dictatorial rules, bad governing and politicizing that which we all refer to as ‘Art’. This goes both ways: the sole birth of Louvre as a cultural icon is steeped in Napoleon’s inclination to steal works of art and ship them back to his homeland. In some cases, Hitler’s intentions may have been the same, with a slight variance based on the fact that his plan had failed.

Francofonia is full with stylistic alternatives that stand defiant against contemporary cinema on several different hierarchical levels: telling of a story, completing a story-arc in a segment/scene, travelling through time via aesthetics and re-telling of historical events through the mounts of seemingly insignificant characters among others. What this does is deepen the conflict between the museum curator (a freedom-like figure) and the Nazi Lieutenant (the oppressing force).

Meanwhile, during everything that’s going on inside the Louvre, Sokurov chooses to cut his own movie’s structure by interpolating ‘false’ historical footage that shows how lowly art is treated in the hands of those who do not understand it. Is it really necessary asks Sokurov, both himself and the audience on the other side of the screen.

At long last, Francofonia is breathtakingly complex a history lesson, telling a noteworthy story of the power of art and the consequences its possible congestion brings upon everybody.