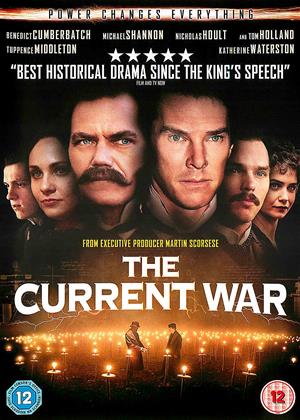 Reviews (5) of The Current War

Not great - The Current War review by PC

Disappointing film with little to no drama. Paints Edison in a bad light, one wonders how much of that is true. Most of the people were rather one dimensional. Give it a miss.

Rather Dull - The Current War review by AA

I originally had great expectations for this film, but reading an earlier review in a magazine at the Dentist raised the warning signs and unfortunately they were right.  The tragedy is with such a pool of acting talent there efforts were wasted.

Next thing be who invented drains...........actually a good idea as be the Romans or Greeks, and folks can dress up even more.

When a film has long pointless captions giving you exposition you know you are in bad hands. turned it off after 3 minutes

A total mish-mash of a film, which has an interesting premise but terrible execution - The Current War review by TB

I rented this film because of the stellar cast and seeing it pop up on the recommended list.

I was unaware of the film's extremely troubled production, which clearly shows and also is a massive reason why I found it to be so difficult to become involved with. Like many people, I was drawn because of the powerhouse of talent that was there. Benedict Cumberbatch is always watchable, Michael Shannon again an actor of immense gravitas, Nicholas Hoult very adept ect ect.

The film is shot in a very strange way, in that the camera is always moving and, unlike this being done in a clever and subtle way, it actively draws attention to it. This, along with an extremely clipped and rushed script, makes the film very discombobulating and difficult to get on board with. I actually stopped watching it after about an hour, because I was finding it very difficult to actually maintain an interest in what was going on.

I will say that, despite the huge difficulties affecting production due to the exposure of the crimes of Harvey Weinstein, I am not convinced that had these events not happened, the film would be radically different. Whilst I am all for stories being told in different ways, you have to bring the audience along with you with these stories. And I think that the film's deep narrative problems would cause problems with any director who was attached.

Whilst not a complete write-off (hence my 2 star score,) it wasn't something which I was interested or motivated to keep watching. Let's hope that the next time someone manages to get all of these incredible actors and crew together again, the results are fitting of their talents.