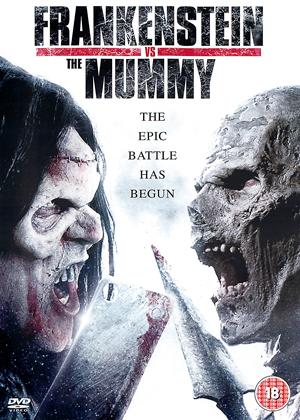 Synopsis:
Dr. Victor Frankenstein and Egyptologist Naihla Khalil. Both professors at a leading medical university; both obsessed with creatures from the past. Victor's experiments in recreating life run amok when he reanimates the corpse of a sadistic, murderous madman. And Naihla's most recent discovery is the cursed mummy of an evil pharaoh whose dark spirit is also about to be unleashed upon an unsuspecting world. Each in their way presents a terrible threat to the human race. But when these two monsters meet - two opposing forces of undefeatable, undead blood-lust - no one will be safe from the slaughter.
Actors:
Max Rhyser, Ashton Leigh, Boomer Tibbs, Brandon deSpain, Constantin Tripes, Robert MacNaughton, Michael Chmiel, Malika Franklin, Stefanie Merola, Martin Pfefferkorn, Rahul Rai, Daniel Rodas, Sean Rogers
Directors:
Damien Leone
Producers:
Jesse Baget, Neal Seidman
Writers:
Damien Leone
Studio:
Image Entertainment
Genres:
Horror

Reviews (1) of Frankenstein vs. the Mummy

Monster Mash - Frankenstein vs. the Mummy review by NP

Ever since Universal were unable to resist matching two of their biggest horror names in ‘Frankenstein meets the Wolfman (1942)’, there has been a periodic fascination with uniting well-known monsters over the years. And in many of these meetings, the battle we are all waiting to see is saved until the last ten minutes. Such is the case here. Sadly, when it comes, the battle is little more than a punch-up in a darkened room.

Monster mash-ups like this are usually designed not to be taken too seriously. The problem with this is that, at six minutes shy of two hours, ‘Frankenstein vs The Mummy’ is just too long. The actors are competent, but the characters are underwritten and impossible to be concerned about. Instead of personalities, their function is to react to the alleged horror around them. The possible exception is Doctor Walton, played by a marvellously idiosyncratic actor with the wonderful name Boomer Tibbs.

The horror, sadly, is fairly negligible, despite some impressive effects. The music – a hugely underrated way of sustaining an atmosphere, in my view – is stock ‘shock’ stings and exactly the same kind of forgettable arrangement featured in many other films of this nature.

The two monsters are fairly effective, and a welcome relief from the CGI that marrs so many bigger budgeted pictures. The Frankenstein monster is very close to imagery described in Mary Shelly’s original story, and played with a snarling evil, completely devoid of pathos. Perhaps unsurprisingly, given the nature of the criminal’s brain he has (once more) inherited, he lacks the eloquence of the original creation and utters some typically coarse expletives during the course of his brief conversations.