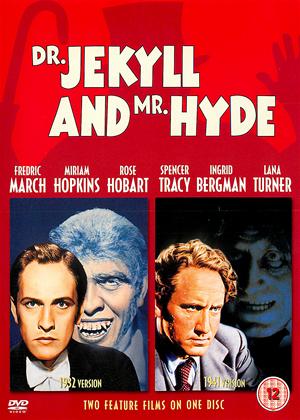 Filming styles and techniques may have changed in the (as I write this) 75 years since this Victor Fleming directed (very loose) adaption of RL Stevenson’s famous story was released; the soft-focus, dough eyed matinee melodrama with clipped accents and chirpy cockneys may now seem something from a bygone age – but, good grief, what a timeless cast.

Three acting legends head the list. Spencer Tracy uses only a modest amount of make-up to transform him from opinionated but kindly Dr Jekyll into snarling, crouching Mr Hyde. Lana Turner steals every scene she is in as the cheeky but enraptured Beatrix, his fiancé. And Ingrid Bergman (originally cast as Beatrix, but happy to play a role that gave her a break from her ‘goody two shoes’ roles) is a compellingly intense presence as rough Ivy, the passionate but mannered strumpet who appeals to Jekyll’s baser instincts. With such a mighty trio, any other cast members might have been drowned out, but the supporting players are every bit as effective as they can be in MGM’s lavish adaption of a story still in the minds of the audience in the form of 1935’s extravaganza which earned Fredric March an Oscar in the pivotal role.

Hyde’s hold over Ivy happens a little too quickly, her chirpy demeanour replaced by un-questioning compliance occurs almost from one scene to the next. It is also surprising she doesn’t note the similarity between Jekyll and Hyde – so much so that she comes to Jekyll to seek treatment for the wounds inflicted on her by his alter-ego (although her performance allows her a few subtle double-takes which indicate she may suspect a similarity). Rather than casually take his frustrations out on anyone who got in his way, in this version Hyde focusses his loathing mainly on Ivy in a way that reminds me of the 1944’s ‘Gaslight’, also starring Bergman, in which a woman’s spirit is almost completely crushed by a vindictive ‘control freak.’

This is a lively, lavish production that doesn’t feel the need to stay too faithful to the original source material which was seemingly overshadowed by the monumental 1935 production. Once out of the shadow, it can be appreciated for merits all its own.

This 1931 version of the RL Stevenson classic is definitive for three main reasons; the amazing, innovative initial transformation of Jekyll into Hyde; its fabulously salacious pre-code content; and for Mamoulian's astonishing camera movement and point-of-view tracking shots. That the director managed to get such fluidity in the era of camera booths is a miracle.

A lot of the credit for the above should go to the brilliant cinematographer Karl Struss. He and the Mamoulian create incredible close ups and impressionistic images that mirror the hero's duality. They design a wonderfully atmospheric pictorial of Victorian London, all candle and lamplight shadows and cobbled streets in the rain.

Fredric March deservedly won an Oscar for his split performance, but Miriam Hopkins steals the film as the Cockney prostitute living in absolute terror of Hyde's brutality. Stevenson wrote a story about the ego versus the id, but it was Paramount that added the naked sexual motifs that still feel transgressive. It is a fetishistic film. The Hays office cut a lot of this for its reissue.

The story presents a paradox: that Victorian sexual prohibition drove men to the services of prostitutes; but without these restrictions, man's animalistic nature is capable of terrible depravity. Eventually we see Jekyll as Hyde's mask, sanctimoniously obscuring his real nature and using it to mediate with a hypocritical society. This is a proto-mad scientist film. It is one of the most brilliant of Hollywood's early sound films