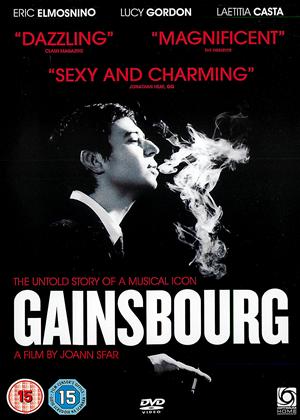 In France, Serge Gainsbourg is worshipped as some kind of god - an artist (so the French think) of such quality that he was allowed to behave in a rude, drunk, selfish way all the time becase he was an 'artist'.

In the UK and the restbof the worl, Gainsbourg can be seen for what he really was: a drunk, rude, pervy little man with a mediocre talent who tried to shock by showing off because his talent wasn't sufficient to speak for itself. So he wrote a number one hit? So what? So did Kagagoogoo! So did Mr Blobby. So did St Winifred's School Choir! Can we have a biopic about them then?

Also this movie can't just tell his life story. Oh no - it's a French biopic you see, so has to be arty and up its own derriere! So we have to put up with large puppets walking around with Monsieur Gainsbourg for no good reason.

I was actually hoping to learn something about Serge Gainsbourg watching thsi mnovie - but I didn't learn much, other than his songs are terribly dated and awful.