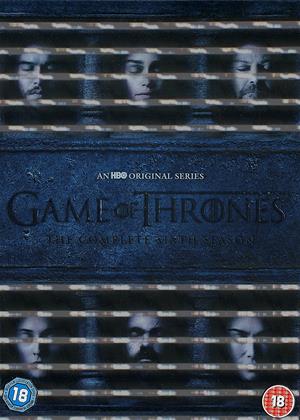 Reviews of Game of Thrones: Series 6

Bold, uncompromising and relentless, Game of Thrones: Series 6 finally cuts the umbilical cord with author George R.R. Martin's A Song of Ice and Fire saga (which fed its premise for a reasonable amount of time), and embarks on an unpredictable voyage of murder, affairs and royal intrigue that put medieval torture techniques to shame. This series can do no wrong, leaping from one location to another and translating a picturesque imagination for every fan, both uninitiated and familiar with its verse, to dig for visual and narrative treasure the series itself offers.

Let’s face it: overall, Game of Thrones is a slow-burner, building anticipation in the most improbable of circumstances and hitting you when you expected it the least. The sixth installment is not exemption from this rule, and continues to follow the previous established tradition with servile, albeit newly acquired effrontery. Fans will see this as ‘world-building’, and they would be right – since the season mashes formulas and breaks conventions at every step of the way, it becomes clear that Game of Thrones is here to stay and conquer television once and for all.

As actor Kit Harington slowly re-enters Jon Snow’s ‘inanimate’ shoes, the show is quick to jump narratives and focus on Melisandre’s unforgettable looks. Thing is, she was as frail as a bag of potatoes in every sense of the word. Her disrobing scene is powerful, without it being too forced. Makeup is award worthy, while acting is mesmerizingly good.

Meanwhile, as characters talked and sceneries changed, Brienne finally saw fit to save Sansa who was trailing in the midst of a bizarre hunting party. Then, Brienne and Sansa reached a mutual appreciation agreement to the relief of everyone watching the show.

On the other side, Daenerys confronted Khal Moro about his intentions and stood up to him in a tension-filled confrontation which resulted in a big revelation about her past with Khal Drogo. It didn’t help matters however, and Moro hurried to hide Daenerys behind closed doors, which nevertheless resulted in a failure. During which, Jorah Mormont saw fit to confess to himself that seeking that which doesn’t want you in return is a hard and endearing process.

Cersei Lannister (played by Lena Headey) had her emotional moments upon learning of her daughter’s death. Her brother Jaime promised to make their enemies pay.

The Dorne leaders saw their final demise from Ellaria Sand’s hands. Arya Strark’s destiny threw her on the streets as a blind beggar, but soon she found herself back at it as a soldier in preparing. The show’s favorite character Tyrion Lannister had little impact in this season, but was nevertheless present as always.

Game of Thrones: Series 6 had a spectacular finale in The Battle of the Bastards. Naysayers would proclaim it ripped of certain scenes of LOTR, but in the end – it doesn’t even matter. The episode is executed with such precision and emotional impact that for a moment, one almost forgets that he’s watching a TV show in the first place.

It’s a season well-worth the praise and all rewards yet to come.