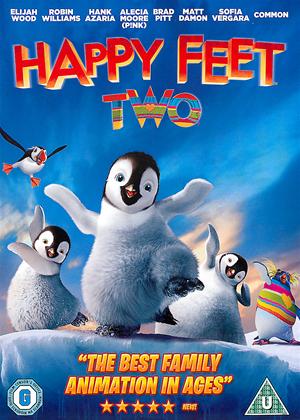 In 2006’s ‘Happy Feet’, we meet a newly-hatched Emperor penguin named Mumble (Elijah Wood); cute and cuddly, but does not know how to sing. No matter, Mumble can tap-dance and he tap-dances well. Now Mumble in ‘Happy Feet 2’ is a grownup, married to his lady-love Gloria (singer Pink), and they have their very own child, Erik (Ava Acres) to look after. Trouble is, Erik is neither a singing nor tap-dancing penguin, and the last thing he wants to do is join the flock othat do the same!

Instead, Erik decides to go on an adventure with Ramon (Robin Williams), the former love guru now in pursuit of his own true love in Gloria (Sofia Vergara). But where there is Mumble’s mini-me lies drama, and as Erik and company get separated from his parents, ice glaciers melt between them, and the divide just keeps getting wider. Can Mumble ever find Erik and bring him back home?

A surprisingly hilarious additions are not penguins, though – they’re krills Bill (Brad Pitt) and Will (Matt Damon) – a couple of microscopic shrimp-like sea creatures that are at the bottom of the food chain. Krills are snacked upon by whales and penguins alike, and yet with Bill, he is adamant to rise above his station. Bill wants to be a predator and his best friend Will wants to make sure he achieves that – before they get eaten.

Rendered in already lush CGI animation, ‘Happy Feet 2’ now can be viewed in 3-D, making it nice eye candy for its audience. You will exclaim, ‘They’re so cute and fluffy’ from start to finish, especially the baby Emperor penguins. But the movie isn’t all about being cuddly; it espouses the problem of global warming like its prequel, although it is not as heavy-handed here. Of course, the musical aspect remains; penguins burst into song-and-dance numbers aplenty, and you will be delighted by it. Sometimes you may feel that the novelty of bursting into song may have worn off, especially since we’ve consumed many episodes of TV’s ‘Glee’ by now. Still, don’t say those penguins didn’t entertain you.