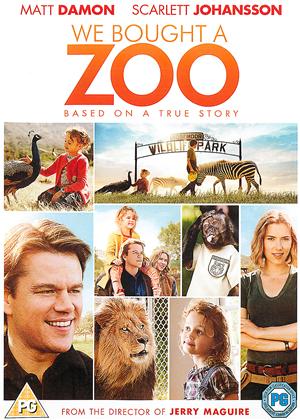 Reviews (1) of We Bought a Zoo

We Bought a Zoo review by Melissa Orcine - Cinema Paradiso

When it comes to romanticism and sentimentality, director Cameron Crowe is your man. He brought us ‘Say Anything’ (John Cusack with a boombox playing Peter Gabriel’s ‘In Your Eyes’), ‘Jerry Maguire’ (‘You complete me’ and ‘You had me at hello,’ anyone?), and ‘Almost Famous’ (with the famous Elton John scene of the cast singing ‘Tiny Dancer’) – Crowe knows how to make a lasting and heartfelt impression. In ‘We Bought A Zoo’, his first film after taking a breather for six years, Crowe is back to his fine romantic form and actors Matt Damon and Scarlett Johansson tag along.

‘We Bought A Zoo’ is based on the 2008 memoir of Benjamin Mee, the character that Matt Damon portrays, a British journalist who turns his son and daughter’s life around by quitting his job and well, buying a zoo. In director Cameron Crowe’s version, they change the nationalities and setting – it’s now set in America – but the essential things are the same.

Benjamin Mee and his children are experiencing grief after the death of his wife due to a terminal illness. The rundown zoo is the project the Mees would like to rebuild because if they can, it means they can start fresh and although they will not ever be able to move on, at least a semblance of it is enough. Within the zoo exotic animals and unpaid zookeepers run amok, but at the helm is Kelly (Scarlett Johansson), who is dedicated to her job and even maybe, could be Benjamin’s next new love.

The faults of ‘We Bought A Zoo’ may be because director Cameron Crowe is not exactly a film auteur. His films reveal a simple and sincere bone in its storytelling. And if it’s a Crowe film, dialogue will be quotable and the music more importantly so. For ‘We Bought A Zoo’, Jonsi of Icelandic rock band Sigur Ros was hired to do its original score, and the marriage of zoo animals and atmospheric music? Magic. Overall, the film is well-acted by everyone. The issues are problematic but can be resolved. You may even cry. A good cry.