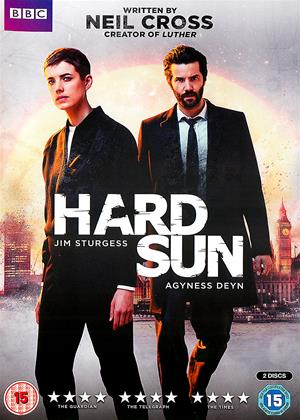 I haven't seen the DVD, I saw this on BBC.

Unlike many sci-fi films, this is not set far in to the future, but could be now. The sci-fi premise is that scientists have uncovered something cataclysmic that will happen in the near future and the information about this is on a USB stick which has been lost and needs to be recovered by the secret service, because the government is keeping this secret from the public. This is hard to believe as the scientific community is not just a couple of boffins, but a world wide community that is not beholden to a single government. Such a discovery would take time to emerge, starting with observations and then theories and counter theories to arrive at the probable outcome. It would be difficult for this to remain secret. It would also be difficult to encapsulate all this on a USB stick that would immediately shock anyone who plugs it into their phone. But let us accept this and go with it, it is sci-fi.

The film starts with this and develops as a detective thriller starting with a murder where the USB turns up and the two detectives involved discover it (The USB stick is strange, it looks like some sort of toy rocket. I presume this was so that it would be recognisable when it turns up in various scenes). While they are trying to solve and hunt for the murderer, the detectives themselves become hunted by the secret service. There is a further complication between the two detectives that I won't go into as it is a spoiler but it adds to the the tension.

There are some good ideas and plot themes in this film, but overall I don't think it has quite worked. It would be better as either a sci-fi (in which case it would need to say something which it doesn't, at least I did not find a moral message), or a detective thriller, in which case it would need a better ending. The film does come to an ending, which is recognisable as an ending, but it felt to me it petered out and was a little weak.

The acting is good, but I found Jim Sturgess less convincing than Agnus Deyn. Nikki Amuka-Bird gives a chilling performance as a secret service agent, I wouldn't like to be the centre of her attention. She is RSC trained so should be capable of any role, but I have only seen her in type cast roles as a character with whom you are not meant to have any sympathy. I would like to see her as the romantic heroine.

Overall the film is worth watching, and has some gripping scenes and enough twists to keep you interested, but I felt at the end it was a missed opportunity.