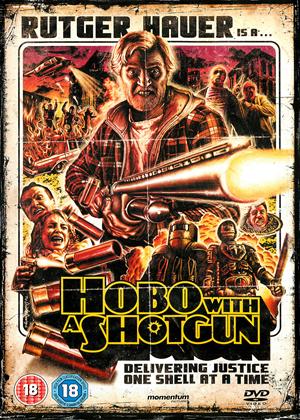 Synopsis:
When an ageing Hobo (Rutger Hauer) jumps from a freight car in a new city hoping for a fresh start, he soon realises he has well and truly reached the end of the line. He finds himself trapped in an urban hell, an anarchic world overrun by murderers, rapists, petty crooks and corrupt cops. Now it's up to him to clean up the streets the only way he knows how... with a 20 gauge shot gun in his hand and two rounds in the chamber. With the city's evil crime boss standing in his way, will the Hobo's own brand of street justice prevail?
Actors:
Rutger Hauer, Pasha Ebrahimi, Robb Wells, Brian Downey, Gregory Smith, Nick Bateman, Drew O'Hara, Molly Dunsworth, Jeremy Akerman, André Haines, Agnes M. Laan, Duane Patterson, Brian Jamieson, Glen Matthews, Zach Tovey, Alexander Rosborough, George Stroumboulopoulos, Mark A. Owen, David Brunt, Scott Vrooman
Directors:
Jason Eisener
Writers:
John Davies
Studio:
Momentum
Genres:
Action & Adventure, Comedy, Thrillers
Countries:
Canada

Reviews (2) of Hobo with a Shotgun

Fantastic Movie - Hobo with a Shotgun review by Gobbo

This is a great modern movie filmed as a 1980's video nasty. This is a must watch if you grew up on these kind of films.

Great, glorious, gory stuff with buckets of blood! If you're easily offended, steer clear :) - Hobo with a Shotgun review by RP

Low budget Canadian schlock horror film filled with over-the-top gratuitous violence. It's supposedly a homage to the 'grindhouse' films of the 1970s - 1980s, perhaps what in the UK we might call 'video nasties'.

Suffice to say that it's seriously violent with much bloodshed and seems to set out to as offensive as possible, albeit in a sort of 'rude schoolboy' manner. Don't watch it if you're easily offended by (for example) assorted slaughtering, heads being removed by a barbed wire tow-rope, semi-naked women gyrating in fountains of blood, schoolgirl prostitutes, drug use, a flamethrower used on a school bus, partial decapitation by hand saw, assault by ice skate, disembowelling a strung up body with a baseball bat with embedded razor blades, motorbike riding demons, much f-ing and blinding - oh yes, and lots of shotgun wounds.

Rutger Hauer's lined and timeworn face is perfect for the unnamed hobo who rides into town and plans to buy a lawnmower for his future garden maintenance business - but ends up buying a shotgun instead.

If that sounds like the film for you, I can recommend it. Great, glorious, gory stuff with buckets of blood - 4/5 stars. But if you're easily offended, I suggest you steer clear.

Hobo with a Shotgun review by Alyse Garner - Cinema Paradiso

Part of Tarantino’s Grindhouse experience Hobo with a Shotgun comes several years after the original release of Death Proof and Planet Terror which is the movie first gained screen time as a fake trailer that aired before the B-Movie special that was Grindhouse.

Rutger Hauer plays a bizarrely righteous hobo who, after turning up in a violent post-apocalyptic town somewhere in Canada, takes revenge on the tyrannical Drake family who run the town after they upset his prostitute companion.

There is very little story line to Hobo with a Shotgun, which is exactly as you would expect really, as the film acts more as a homage to the cult exploitation movies it emulates. Yet it plays this role brilliantly, being utterly over the top yet maintaining its comic edge.

The film is more than that however, it has a creative ingenuity about it, a spark that sets it out from the somewhat disappointing Machete – also a film created from a Grindhouse trailer – in a way that the slightly odd guy from the pub doesn’t look so bad when you compare him to the naked knife wielding lunatic who is running down your local high street preaching hellfire, damnation and alien invasion.