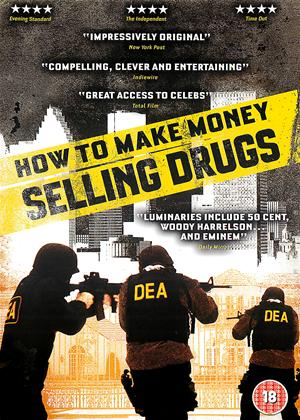 Rent other films like How to Make Money Selling Drugs

Reviews of How to Make Money Selling Drugs

It's rare that I come out of a film feeling oddly sympathetic to drug dealers but it's hard not to when the world that you are presented with over the course of the film is so bleak, scary and ultimately corrupt as the one that How to Make Money Selling Drugs presents.

The film, framed like the levels of a videogame, show what it really takes to become a drug dealer in America and how to get rich doing it. The film looks at the little people like the street dealers to the cartel lords that profit off the misery of others. All the while the film shows the true nature of the American war on drugs as well as how it has crafted America into the country it is today, without even realizing it.

The film never dolls out judgement, thats our job, but it does give a brutally honest look at the drug trade, the kinds of people you might expect to see and more than a few unexpected sorts, as well as the idea that the people fighting to rid the country of the stuff (specifically marijuana and cocaine in the film) are just as interested in profiting off of it as the dealers.

The film is designed like a game to remind audiences that the game is rigged, the crime will keep happening because people need it to, the police who are making money hand over fist off it, to the unbelievably poor just selling to get by. Every now and then the film shows a side of the whole mess so surreal its hard to imagine it being true but that ends up being the films whole point, the entire subject is a joke, a political nightmare created by politicians.