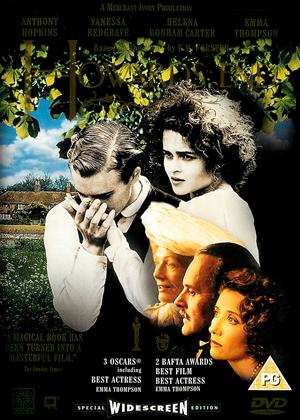 Set in Edwardian England, and very faithful to the novel by the same name, written by E M Forster, the film is very good. It has become a classic in its own right.

Helen Schlegel is an arty non-conformist while her sister, Margaret, is more realistic; both are intellectuals. Margaret meets Henry Wilcox, a rich, widowed businessman involved in the colonial trade. Helen, because she wants to help him, gets involved with a lower-middle-class clerk, Leonard Bast, but he is married already. ‘Howards End’, the Wilcox family property in the country, plays a central part in the story.

The reconstitution of the period is remarkably good and the actors (e.g.: Anthony Hopkins) are outstanding -- including the supporting roles, it must be stressed. The film dwells on the mentality at the time and class differences between strata of society that live in parallel universes. When Helen Schlegel attempts to break down those social barriers, everything ends up destabilized with unexpected consequences.

It is most probably one of the best British historical and sentimental dramas ever turned into films.