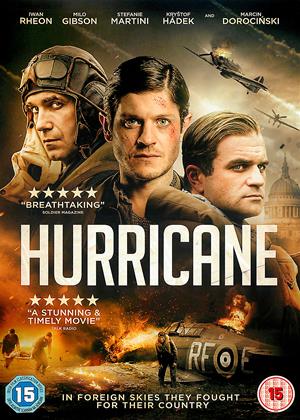 First, I know my history. That is why I know the agenda this film desperately tried to promote - ie that all Brits were racist and horrible to Polish airmen in WWII is a lie. The analogy at the end re 56% wanting Poles to return to Poland is also a lie - of course, people wanted Poles to return home to a free Poland (for their own sake NOT because they were racist against Poles) - the USSR made that impossible and actually killed and imprisoned many who returned.

The British (actually ENGLISH) RAF men - I note the director has a Scottish name - are portrayed as racist, bigoted, hateful thugs - a racist portrayal and absurd as any pantomime villain. Maybe they should have worn twirly moustaches as with racist English stereotypes in tedious song-and-dance Bollywood movies? They're as 2D as that - cartoon carboard cutouts of baddies.

The Poles had to be trained and learn enough English so as NOT to put others lives at risk. MANY other nationalities took part too. Czech for example AND I would recommend the movie DARK BLUE WORLD which shows that. MISSION OF HONOUR is another recent film showing what Polish airmen did.

BUT the best movie EVER is BATTLE OF BRITAIN from around 1970 - fantastic REAL aerial dogfight scenes - stunning - and all against specially written orchestral music! Watch that to see how the CGI here pales into parody.

Other problems with this film: the women are TOO modern - my mum was of that generation and I can tell you women then did NOT get drunk and put it about or have the aggressive girlpower attitudes on display here. You always had 'goodtime girls' BUT other women avoided them in general.

There is a scene of whooping and hollering after an airman plays the piano. People did NOT whoop and holler in 1940. Not even in the 1980s! This is a recent US import thanks to shows like Jeremy Kyle and other reality TV.

There is NO NEED to do down the British in order to make the Poles look like heroes - that reveals the amateurishness of the writers, for a start. Better writers would have created balance to reflect the truth - that in general Brits and Poles go on very well, plenty stayed after the war, more Polish immigrants came in then too (incl the dad of a guy I did my A levels with who had been recruited into the German army; other Poles were drafted into the Soviet army. No choice BUT we in Britain let them in., We did NOT chuck them out like the trash).

What always worried me about movies like this (and others such as ARGO, THE PATRIOT, U571) is that they show a lie which most people believe to be truth.

Here there is a clear attempt to make an analogy with Brexit which is just plain wrong - it's propaganda really, worthy of Stalin or Hitler. Fake news, if you want. The film makers should be ashamed of themselves. The British and Polish and other members of the RAF in 1940 should not - they stood against a European empire then, and stood fast. Maybe THAT is the analogy with Brexit eh?

2 stars. But watch the other movies I mentioned and watch a documentary on the RAF too - they are closer to the truth. This is the opposite of that. Very disappointing and, frankly, shameful.

A bargain basement, badly made and often historically inaccurate film.  Awful CGI and modernised character behaviour.  I cannot believe anyone financed this with any expectation of profit.  It has the production values of a satellite channel re-enactment documentary probably named ‘Nazi Mega something’ etc.  It might have been better if the Director had read a few history books first however this would have taken time of course.  Avoid.

A fascinating film covering the famous 303 Squadron of Polish airmen particularly during the Battle of Britain, and the sterling work they did to repel the LUFTWAFFE! Despite opposition from fellow airmen who did not like them stealing their thunder.

This is an excellent movie. OK the cgi is not the best, but the story is so strong and the acting good that you are gripped by a story that needs to be told.

Sadly the U.K. Does not come out of it too well, we really were awful to the brave Plolsh airmen during the war, and even worse afterwards.

A movie that needed to be made .

Enjoyed it - Hurricane review by TT

Good storyline and quite thought provoking. The bunker was well depicted. I've given the film 4 stars as I felt the CGI of some of the flying sequences a little poor.

Good but not very good - Hurricane review by EB

Many people in the UK born after WW2 don't know about the role Polish airmen and soldiers played in defeating the Nazis. This film tries to correct that by focussing on the brave airmen. However the Brits were portrayed as being a bit too racist at times and the Poles were portrayed as being too rowdy and rebellious, in this film. The overall story and effects were  good though. Being born of Polish refugee parents I know the Poles took their roles seriously, but they knew how to have a good time and maintain their culture, and integrate into life in the UK. Many didn't want to return to a Poland ruled by the Soviets.

However many felt betrayed by the agreements made at the Yalta conference, including not being part of the victory parade, as depicted in this film.

Let's not forget all the other soldiers, sailors and airmen from other countries who fought on our side too. We won because we worked together.