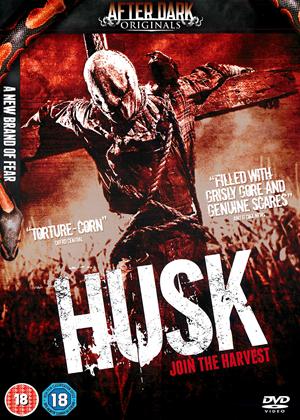 Synopsis:
When a murderer of crows smashes into their car windshield, a group of young friends are forced to abandon the vehicle leaving them stranded beside a desolate cornfield. Hidden deep within the cornfield they find a crumbling farmhouse – but they soon discover that instead of a sanctuary, the house is actually the centre of a terrifying supernatural ritual that they are about to become part of…
Actors:
Devon Graye, Wes Chatham, C.J. Thomason, Tammin Sursok, Ben Easter, Josh Skipworth, Nick Toussaint, Michael Cornelison, Aaron Harpold, Candice Rose
Directors:
Brett Simmons
Writers:
Brett Simmons
Studio:
Koch Media
Genres:
Horror, Thrillers

I didnt go into this movie expecting much but was entertained nontheless.

Good brainless slasher movie which was reasonably well acted/directed and was not as predictable as many films in this genre.

If you enjoyed the Texas Chainsaw remake a couple of years ago then this is a good choice.

For a low budget horror film the production values were good and the picture and sound quality on blu-ray was excellent.

This is an effective, mildly graphic shocker of the ‘Jeeper Creepers’ variety where a selection of teens get themselves involved in the eerie ritualistic machinations of animated scarecrows eager to recruit more innocents to become like them. There is no CGI, the scarecrows are physical, solid creatures, and as such, provide a tangible and frightening threat.

The location is beautifully shot and lit. The use of colour is especially worthy of note. The cornfield and decrepit farmhouse nearby provide a wonderfully creepy location for many of the events.

The teens are a formulaic bunch. Johnny, the one who goes missing; Brian, the square jawed hero; Chris, the untrustworthy one; Scott, the one in glasses (he seems empathetic and witnesses an insight into the ‘scarecrows’ past), while talented Australian actress Tammin Sursok has the thankless role of Natalie,‘the girlfriend’. And that is where I find this film lacking. Directly below this review is a film called ‘Beckoning the Butcher’; in it, we get to know the leads well, they are rounded characters. They laugh, joke and argue with each other. There are no jokes in this film – just posturing performers with whom we only sympathise when they begin dying. That isn’t to specifically knock ‘Husk’, which is an extremely well made and well-paced film – but just how more involving (and scary) would it have been for audience if they were actually invited to be invested in the main characters?

It is very effective, throughout much of the film, that the ongoing pattern of the spirit’s plan continues relentless, no matter what our heroes try to do. One by one they are strung up and killed, become infected by the ‘curse’ and, zombie-like, lurch towards the upstairs farmhouse room to fashion themselves a new scarecrow mask. It is through the mask that their possession is complete. When that is removed, their spirit then animates another in the ever increasing army.

The ending is as open-ended as any can be, and provides a real punch-the-air moment. It seems Chris is on the verge of rescue by two passers-by, even though another scarecrow is lurking in the foliage nearby. Fade to black.