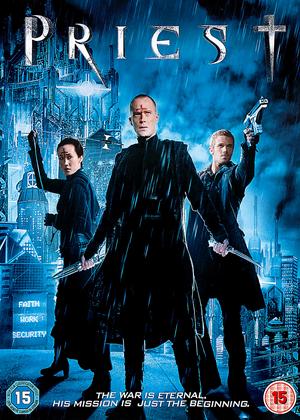 I was praying for a good film and was let down badly! - Priest review by CS

Visually this steals liberally from a host of classic movies such as Blade Runner and Judge Dredd, with a good helping of Guillermo Del Torro's fantasy imaging thrown in for good measure. The cities borrow heavily from Blade Runner, whilst Priest himself is very much in the Judge Dredd style right down to the motorbike. Apocalyptic style landscapes and scenery borrow heavily from Mad Max. The Vampires are straight out of a Guillermo Del Torro movie, think the Tooth Faries in 'Hell Boy 2' or Pan's Labyrinth. Paul Bettany puts in a good turn as the anti-hero of the title given that the storyline is so weak. The CGI effects are average to poor. All the Kung Fu style Martial Arts fighting and throwing things in slow motion has so been done to death in films like 'The Matrix', that it's starting to all get a bit dull. And in the end this film fails to light my candle! Ok for a night in with a pizza, but expect to left with an ache to see something else afterwards which has a bit more bite to it!!

‘Priest’ is the second collaboration between director Scott Stewart and Paul Bettany, whose movie ‘Legion’ deals with the apocalypse inside a dingy diner. This time, Stewart and Bettany tackle a post-apocalyptic world overrun by vampires that war with and feast on humans in a futuristic Western cowboy-and-Indians setting. Being part of the clergy, Priest (Paul Bettany) is locked in tradition and he is not allowed to discard his vows. Priests are to stay behind the confines of the Church, not to wander into the chaos and squalor of the city. But when his niece Lucy (Lily Collins) is kidnapped by a band of vampires headed by ominous Black Hat (Karl Urban), Priest leaves the Church to search for her. A lawman named Hicks and a former yet bad-ass Priestess tag along; little do they know that Monsignor Orelas (Christopher Plummer) has also sent his own team of stealthy priests to get back Priest, dead or alive.

Based on a series of Korean graphic novels by Hyung Min-woo, ‘Priest’ does away with the exposition on how their world has come to be and expedites the action. Vampires are eating humans, let’s kill ‘em, go go go – that’s basically what the mission of the movie is. Rendered with stunning visuals, action sequences in slow-motion, and imaginative production and costume design, it is gore-y eye candy.

Everything in it –characters real and CGI-ed – are amp-ed up: Priest and his fellow men (and woman) of the cloth know kung-fu and are not averse to dispense violence, and the vampires are disfigured and disgusting, a sheer contrast to the popularity of gorgeous bloodsuckers these days. ‘Priest’ wants you to understand that vampires are not to be trusted; they’re not your friends, not prospective lovers. To vampires, you are human which means you are food. So suit up, grab something pointy or with bullets, and get some.

The movie ‘Priest’ seems preposterous but the premise has warned you of that. You can’t say that ‘Priest’ lacks the fantasy and action that any popcorn movie-viewer won’t enjoy. The movie is a 3-D creature feature.