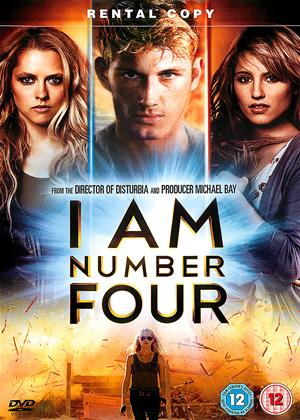 Reviews (2) of I Am Number Four

I can’t say I hated this film as it did the trick for an easy watch, but I was expecting something along the lines of a feature length Roswell episode and was left disappointed. All the usual high school character boxes were ticked (new kid in town, geeky best friend, bad jock bully, ex-cheerleader-turned-good) but none of them were likeable (well maybe the dog!). Whilst a certain amount of disbelief is always suspended in such stories, this plot was full of holes that made following it quite annoying – maybe I should have read the book first, although I’ve heard it’s not much better!

Handsome, US teen with alien superpowers rescues the world and his friends - so formulaic, and uninteresting.

At least the dog survived - kills an evening but no suspense, no thrills, nothing beyond the ordinary.

I Am Number Four review by Melissa Orcine - Cinema Paradiso

Mix ‘Twilight’, ‘Smallville’, add The Chosen One factor and superhero alien powers, and what do you get? ‘I Am Number Four’.

‘I Am Number Four’ is the big screen adaptation of the Young Adult science-fiction novel of the same name by Jobie Hughes and James Frey (‘A Million Little Pieces’.) Its screenplay was written by Alfred Gough and Miles Millar (creators of TV’s ‘Smallville), and Marti Noxon (writer for TV’s ‘Buffy the Vampire Slayer’.) With all that TV fantasy pedigree, you’d think ‘I Am Number Four’ is a shoo-in for greatness.

Brit Alex Pettyfer plays an American high school kid, John Smith. Unbeknownst to him, he’s one of the remaining aliens from planet Lorien that fled to Earth and their enemy race, Mogadorians, are hell-bent to kill all of them one by one. They’ve succeeded on the first three; John is Number Four and since the Mogadorians can only kill them in sequence, John will have to be hunted down. Together with his Warrior/Guardian Henri (Timothy Olyphant) and crush Sarah (Glee’s Dianna Agron), they run for their lives and action sequences abound. At the helm of this is director DJ Caruso (‘Disturbia’), who has mastered the teen thriller but falls short in highlighting anything new.

No doubt the effects are good. The casting could’ve been better. Alex Pettyfer has been touted as the Next Big Thing, but his performance resembles that of the actor who played ‘Eragon’. Who’s that guy, you ask? Exactly. Dianna Agron, too pretty for her own good, plays only that: pretty. Something refreshing here is Teresa Palmer as Number Six. Who knew she could be bad-ass too?

Mainly, ‘I Am Number Four’ is a trite story. The alien from another planet who grows up on earth who is part-emo with issues has been done before (Clark Kent/Superman/Smallville, anyone?!) but you can come up with something interesting, a different take, maybe a much darker tone. Unfortunately for ‘I Am Number Four’, it stuck to being safe resulting in a hodgepodge of ideas and influences too generic to even make its mark as a movie.