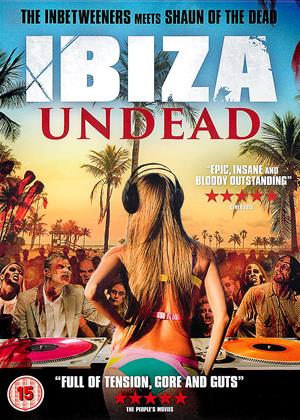 Ibiza Undead is a zombie flick, plain and simple. But does it offer anything new in the genre? First off, it offers semi-naked girls in bikinis, so there’s that. Secondly, Ibiza Undead combines exotic locations with your run-on-the-mill parties to bring about: nothing new in particular. That’s right: Ibiza Undead is a perfectly mediocre film which you’ll forget about in t -5 days. That isn’t to say that it doesn’t offer any entertaining value however. And this is why we’re here.

The film starts fairly innocently, and it quickly establishes itself as a horror-comedy right off the bat. Which basically means the zombie virus/outbreak is not given any background whatsoever, as it’s expected the audience to gulp this pop-convention just as is: no science, no nothin’. But this doesn’t matter at all, since Ibiza Undead doesn’t try to be anything more than a self-aware zombie flick parody (which I must admit, there’s too much of those these days); the result: fun, dumb experience featuring a carnage of bodies and other gruesome antics.

Ibiza Undead features a simple story, a simple setup, and goes from there. And the direction it goes is a total and utter annihilation of the human flesh. And so, it immediately becomes apparent that director/writer Andy Edwards’ keenness to "Shaun of the Dead" is, well, immediately apparent (in terms of dialog, how some scenes play out, and other details as well). However, Ibiza Undead can also stand on its own legs and for this sole reason – it can be classified as "original enough".

As far as acting goes, Ibiza Undead neither breaks any pre-established conventions – nor does it care how the delivery of its chosen pupils goes. Given the budget of the film and the way the production unraveled, this is a surprise literally for no one, actors included.

Gory stuff aside, Ibiza Undead does feature some genuine dramatic moments, which are quickly overshadowed by the sudden emergence of, gore. Which is kind of ironic, but not without precedence: after all, Andy Edwards’ film is a film about zombies and it’s zombies that you’re going to get.

In addition, the film’s strong points are undeniably its makeup, sets, and lightning. Even for a low-budget (by Hollywood standards) zombie flick, Ibiza Undead features very lively zombies who light up the screen like a Christmas tree (with some additional help of the lightning effects). For one, it’s great when the makeup department doesn’t forget about the rest of the zombies’ bodies, as it’s often the case with other unproductive pieces of celluloid tape.

In conclusion, Ibiza Undead is worth at least one watch, but be sure that your windows and doors are tightly shut (don’t forget about your back door too!).