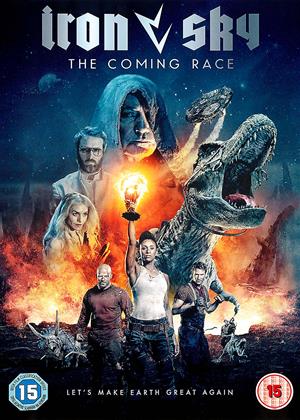 Rent other films like Iron Sky: The Coming Race

I really enjoyed the original Iron Sky movie and even watched The Dictator's Cut.

The trailer for The Coming Race initially looked exciting and featured Jesus with uzis. Years later, the movie came out and it was a total mess. It was boring, lame and the Jesus scene had been cut. This was a particularly bad sequel and adds nothing whatsoever to the original film. No engaging characters, no plot twists or real surprises. It was akin to Land of the Lost (but minus the fun). The main actress looked like Vin Diesel and had no personality to speak of. The lead actor was a cliche Russian character who seemed to have recycled dialogue; he just kept on saying the same thing.

Iron Sky falls prey to the same staggering sequel syndrome as that of Starship Troopers. For what once started as a campy bad movie of Nazi propaganda satire has now morphed into the very lukewarm, dime-store B-movie it set out mock in its replicating ways. The joke is no longer about how overblown and ridiculous Nazis are in this sci-fi satire. The joke is now that Iron Sky continues to have movies that pack so little punch past a movie-of-the-week allure in their absurdity.

In this third chapter of the crazy timeline, a band of nuclear holocaust survivors attempt to survive as best as they can for being trapped in the Nazi’s abandoned moon base. They can’t stay there for long and decide to hitch a ride on a spacecraft to make their way back to Earth. Once they arrive, they have a new mission; travel into the center of the Earth to find the Holy Grail. The Grail is being guarded by an army of reptilian shape-shifters and their leader is none other than the staggering zombie of Adolf Hitler riding a dinosaur. Of course he is.

The assembly of The Coming Race is more like B-movie mad-libs, where various nouns are strung together for the formation of campy entertainment that savages Nazis. This is not to say that there isn’t some silliness that can be enjoyed from such a picture. Certainly there’s some fun within the visuals of watching a woman trying to karate kick a dinosaur and charriot race of, well, more dinosaurs. The whole film is even played up earnestly to never wink too hard at the camera, letting the absurd displays speak for themselves.

But what it never quite feels like the film is ever going anywhere near as subversive as its predecessors, stumbling more with nostalgic wingings of Land of the Lost than any palpable WWII savaging. This is perhaps because the joke of Iron Sky has now come full circle with a film that was struggling to be made, relying on fan-funding to pull it through to the finish line. It feels like a cheaper film made by fans who genuinely wanted to see this saga continue for one reason or another. I write this even though the film is by far the most expensive Finnish live-action film ever made, making it all the harder to accept. It’s just a bit of a shame that the final result is more akin to that of Machete Kills, willing launching itself off the rails but into a ditch that is already packed with other grindhouse goofball posers, hollering “look how crazy we are” as their film descends into a genre mashing most mild.

Ultimately, Iron Sky: The Coming Race rarely packs that same giddy punch of what it once was. It has become the knock-off of a knock-off, a watered down version of its former funny self. The script is a garbled mess of sloppy satire, the computer graphics a dated smear of direct-to-video trash, and the jokes so unbelievably aged it seems more like a lackluster DVD from a rental store circa 2005. To a degree, that cheapness has a certain allure but when being branded as one of the more expensive Finnish films ever made, that artifical campiness feels most hallow and disappointing.